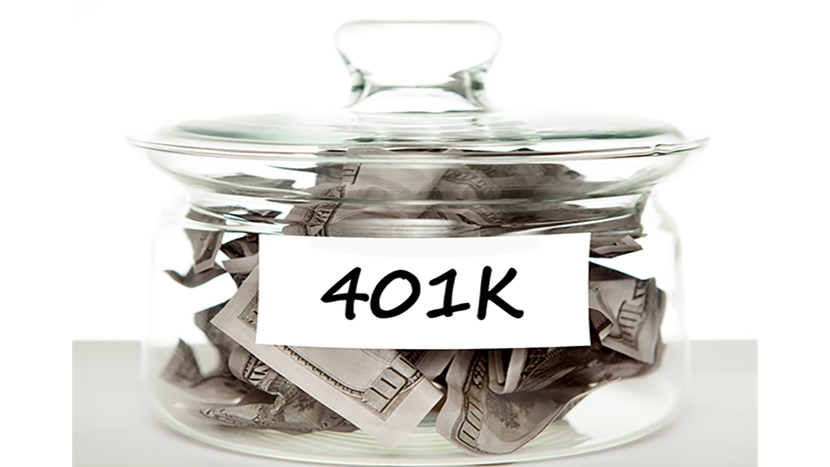 Like It or Not, Here Are the ABCs of ADP Testing

True or false:  how much a Highly Compensated Employee is allowed to contribute to a 401(k) plan may depend on how much Non-Highly Compensated Employees and other HCEs choose to contribute.  At first glance, the answer to that question would seem to be false.  How much salary to defer into a 401(k) is a personal decision.  Why should it matter what other employees are contributing?

As you might have guessed (since we’re devoting a whole article to this topic), the answer is actually true.  Something called the ADP test tells you whether HCEs are deferring too much of their salary compared to the NHCEs.  Whether you think the ADP test makes sense or not, it has been around for decades and doesn’t look to be going anywhere anytime soon.  So here is a brief lesson on what this test is all about.

The first step in the ADP test is to determine the ADR for each employee.  The ADR is equal to the employee’s deferrals divided by the employee’s compensation for the year.  An employee making $50,000 who defers $5,000 has an ADR of 10.00%.  ADRs are calculated to the nearest hundredth of a percentage point.  Simple enough so far?

Next, the ADP is calculated for the eligible HCEs and the eligible NHCEs.  The ADP for each of these groups is the average of all the ADRs for the group, calculated to the nearest hundredth of a percentage point.  Here is an example: 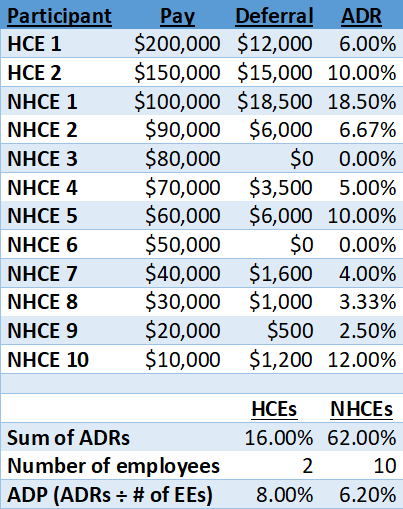 At least two things about this example are noteworthy.  First, an employee who defers $0 is counted in the test with an ADR of 0.00%.  Second, there is no weighting based on how much you earn.  The ADRs for the HCEs are simply averaged together even though HCE 1 makes more money than HCE 2 and should theoretically be weighted more heavily than HCE 2.  Likewise, NHCE 10 is responsible for 12 percentage points of the NHCEs’ ADP, which is a lot higher than NHCE 2’s 6.67 percentage points, even though NHCE 10 defers only $1,200 compared to NHCE 2’s $6,000.

What the NHCEs Defer Affects What the HCEs May Defer

The ADP test in our example is satisfied because the HCE ADP of 8.00% is less than two percentage points greater than the NHCE ADP of 6.20%.

Current Year vs. Prior Year Testing

If an ADP test fails, some corrective action needs to be taken.  Usually, a failed ADP test means HCEs will have to have some of their deferrals refunded.  Making a Qualified Nonelective Contribution (QNEC) or a Qualified Matching Contribution (QMAC) to NHCEs is another way to correct a failed test.  These corrective measures are a hassle at best and quite expensive at worst.  It would be better if the HCEs limited their deferrals up front to amounts that wouldn’t cause an ADP failure.

Trouble is, it’s not possible to know what the upcoming year’s NHCE deferrals will be so the HCEs can plan accordingly.  If you take a guess what the NHCEs will defer, but the NHCEs defer less than expected, a failing test might occur even if HCEs had cut their deferrals back based on last year’s ADP test.  If the NHCEs defer more than expected, then the HCEs might have cut themselves back too much and left some deferral opportunities on the table.  Is there a solution?

Special rules apply for the prior year testing method if there has been a significant change in who is covered under the plan. 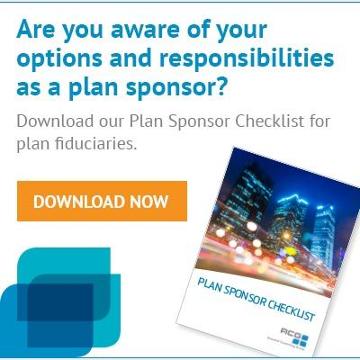