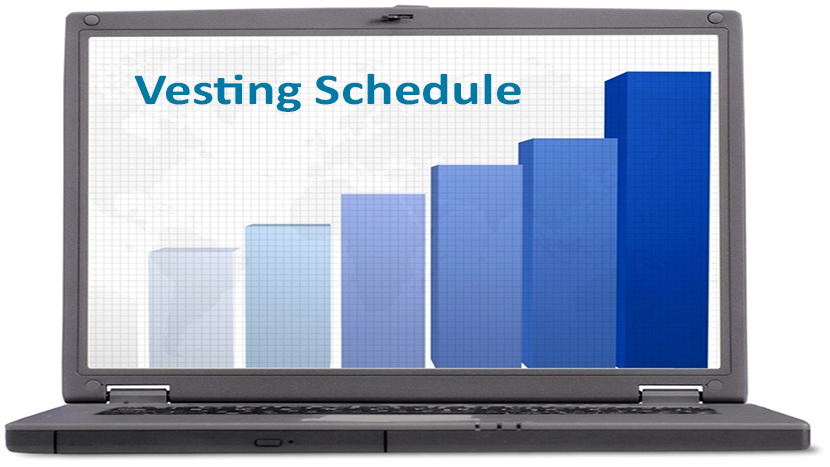 Vesting Rules Determine How Much of Your Retirement Account You Own

In qualified retirement plans, vesting refers to what portion of your benefit you get to take with you when you receive a payout from the plan. It’s how much of your account you “own.” If you are 100 percent vested, it means you are entitled to receive your entire account balance upon distribution.

If you are zero percent vested, you would not be entitled to receive any of your account balance upon leaving the company. Instead, your account would be forfeited. The money would stay in the plan and be moved to the accounts of other employees or be used to pay administrative fees. You can be partially vested, say 40 percent or 60 percent, in which case you could receive part of your account as a distribution, while the rest of your account was forfeited.

Another common vesting schedule is the “three-year cliff” schedule:

A plan may use a different vesting schedule so long as it is at least as generous as one of these two schedules at every level of service. Thus, a two-year cliff schedule would be permitted, as would a five-year graded, as would a schedule that starts out looking like the six-year graded schedule but then provides full vesting at four years of service. Each of these alternative schedules has a vested percentage that is at least as high as the six-year graded or three-year cliff schedule at every level of service.

A cash balance plan must provide for full vesting after three years of service.

A “year of service” as it relates to a vesting schedule is somewhat of a misnomer. For vesting purposes, a year of service is usually defined as the completion of 1,000 hours of service in a single plan year. For an employee working 40-plus hours a week, it takes six months or less to attain 1,000 hours of service. Thus, it is possible for an employee hired on July 1, 2018 to attain three years of vesting service by June 30, 2020. A vesting year would be credited for each of 2018, 2019, and 2020 – three years of vesting service, but only two years as the calendar flies. If the vesting schedule was three-year cliff, this would be good enough to get that employee to 100 percent vesting.

It is possible for an employee to work at a company for a long time but not ever attain full vesting if he doesn’t complete enough hours of service. Under normal vesting rules, someone who works 20 years at 500 hours of service per year will never have a year of service for vesting and therefore will always be zero percent vested (unless and until he attains normal retirement age at the company).

Certain contributions may not be subject to a vesting schedule and must be 100 percent vested at all times. Salary deferrals in a 401(k) plan must always be 100 percent vested. It would be bad public policy to have someone contribute to a plan from his own paycheck and then forfeit that money if he didn’t work enough years of service. Fewer employees would probably choose to contribute under those circumstances.

Here is an example to illustrate the points made so far. Consider a 401(k) plan that includes salary deferrals, safe harbor nonelective contributions, and profit sharing contributions. The vesting schedule is six-year graded. Jenna has completed three years of service and is therefore 40 percent vested. Her vesting situation may be illustrated as follows:

Should Jenna leave the company and receive a distribution of her account balance, she would be entitled to $146,000 and not the full $170,000 because she is only 40 percent vested in her profit sharing account. The other two money types are always 100 percent vested, so Jenna would receive those full amounts. The $24,000 from the profit sharing account that is not vested would be forfeited and reallocated to other employees or used to pay fees.

An employee must generally receive credit for vesting service even for years worked before becoming eligible for the plan. A plan may exclude years of service completed before age 18 or before the plan’s effective date, assuming there is no predecessor plan.

An employer may decide to amend the vesting schedule in its plan. If it does, any participant with at least three years of service may choose to remain on the old vesting schedule if it is more advantageous to do so.

If the change in plan year is made in 2018, the vesting computation periods will look like the following:

The employee will be granted a year of service for any of those periods during which he completes 1,000 hours of service. Note that the hours of service worked between January 1, 2019 and September 30, 2019 are counted twice. Contrary to popular belief, there would not be a short vesting year from October 1, 2018 through December 31, 2018 even though there is a short plan year of that duration.