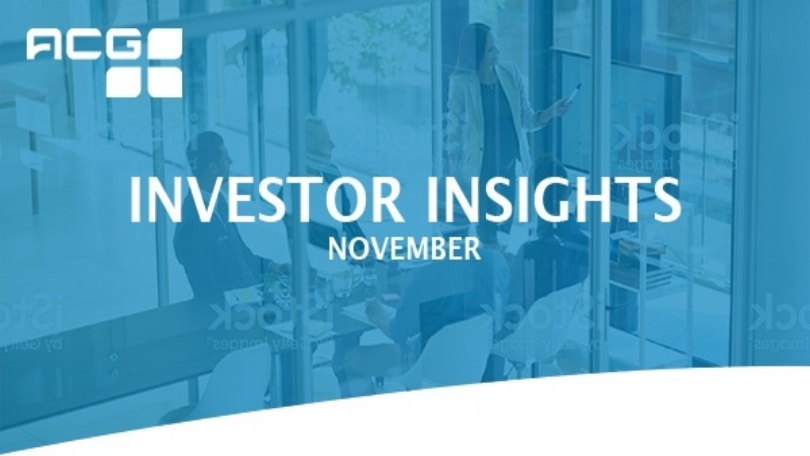 The S&P 500 lost 6.84 percent during October. This is the worst calendar month decline since September 2011.

The Bloomberg Barclays US Aggregate Bond index has a year-to-date loss of -2.38 percent. The flagship index for fixed income is on track for its worst ever calendar year return.

GDP in the U.S. grew at an encouraging 3.5 percent in the third quarter, according to the initial reading.

Equity markets saw large declines last month. The S&P 500 underwent its worst calendar month loss since September 2011 (when it was down 7.03 percent) losing 6.84 percent during October. U.S. Small Cap companies, the most attractive asset class through the year’s first three quarters, lost 10.48 percent during October, giving up most of their 2018 gains. The story was similar abroad, with developed markets losing 7.96 percent and emerging markets down 8.71 percent. Interest rates, by and large the driver of the selloff, rose during the month. The U.S. 10 Year Treasury yield opened October at 3.07 percent and finished the month at 3.16 percent. While this is a moderate increase overall, the yield spiked to nearly 3.25 percent early in the month—that represented an impactful increase, particularly considering the yield was as low as 2.81 percent in August. This led to the continued struggle of fixed income, with the Bloomberg Barclays US Aggregate Bond index negative for the month by 0.79 percent. The S&P 500 briefly entered into correction territory, defined as a 10 percent decline from its peak. The CBOE Volatility Index, the “VIX,” closed the month north of 20, up from its October open of 11.63.

What’s odd is that, while the economic and corporate earnings releases during October were somewhat of a mixed bag, we would still characterize the landscape, at least in the U.S., as very encouraging. On the economic side, the unemployment rate fell to a 49-year low of 3.7 percent. Both Consumer Sentiment and Business Outlook numbers were released at impressive levels. The first reading of GDP for the third quarter came in at a respectable 3.5 percent. There were some instances of softening—retail sales underperformed expectations and both housing starts and existing home sales disappointed—but this occurred in areas that have seen such growth in recent years that a slight cooling isn’t very surprising.

With the exception of some big names like Amazon and Caterpillar missing expectations, corporate earnings season has also been promising. According to FactSet, as of October 26, 48 percent of companies in the S&P 500 had reported third quarter earnings. Combining the actual results of companies that have reported with the estimated results for those that have not, we are on track to see a year-over-year growth rate of 22.5 percent for the third quarter. That’s not as high as the 25.0 percent seen during the second quarter, but it’s still a massive number in historical terms. The S&P 500 index is weighted by each company’s market capitalization, so you might think that this recent selloff is a result of heavy hitters like Amazon dragging the rest of the index down, falling in October after its stock experienced a meteoric rise through the first nine months of the year. However, companies throughout the index have seen declines in October. The Invesco S&P 500 Equal Weight ETF, which removes the effect of market cap weighting, was down by 7.21 percent during October. The upshot here is that even the companies that beat earnings expectations were punished by the market. FactSet reports that S&P 500 companies are seeing the worst reaction to positive earnings surprises since the second quarter of 2011.

Why are the markets ignoring the good news? While there may be some headwinds due to Trump’s trade talks or the uncertainty that comes with a midterm election, the threat that appears to be overwhelming markets is the prospect of the Fed hiking interest rates too quickly. The CME FedWatch Tool puts the probability of a Fed hike in December at about 67 percent. If it occurs it will be the fourth increase this year, and it appears there’s a reasonable chance of a subsequent hike following in March. With the Fed Committee striking the word “accommodative” from its released statement in September and President Trump taking the unprecedented step of criticizing the Fed’s monetary policy, it’s easy to think that the Fed may be moving too quickly. However, compared with any hiking cycle going back to the 1980s, the Fed is moving substantially slower this time. It has taken the Fed 33 months to bring the Fed Funds rate from 0.25 percent to 2.25 percent since it began raising rates in December 2015. In the most recent cycle of 2004-2006 the Fed Funds rate increased by 4.25 percent in 25 months. In the two cycles preceding that, the rate increased by about three percent each time, each cycle lasting only about 12 months. Not only is the Fed moving at an historically slow pace, but the rate still remains near historical lows compared with before the Great Financial Crisis.

If you couldn’t tell, we think the latest market selloff is an overreaction. That’s not to say it will end next week and that you should adjust your investment strategy—the amount of risk you take should always be based off of your investment objectives and risk tolerance, not your expectations of what the market will do. And neither are we saying that the markets are immune to other threats. Trade tensions could (re)escalate or some other unforeseen risk may present itself. But if the prevailing threat is that the economy can’t handle a sub-three percent Fed Funds rate, we expect that narrative to come and go. It’s possible that markets will find some stability once the midterm elections pass. Even though the elections have no bearing whatsoever on monetary policy, the positive storyline (the certainty that comes after elections) may eclipse the negative storyline of interest rate fears.