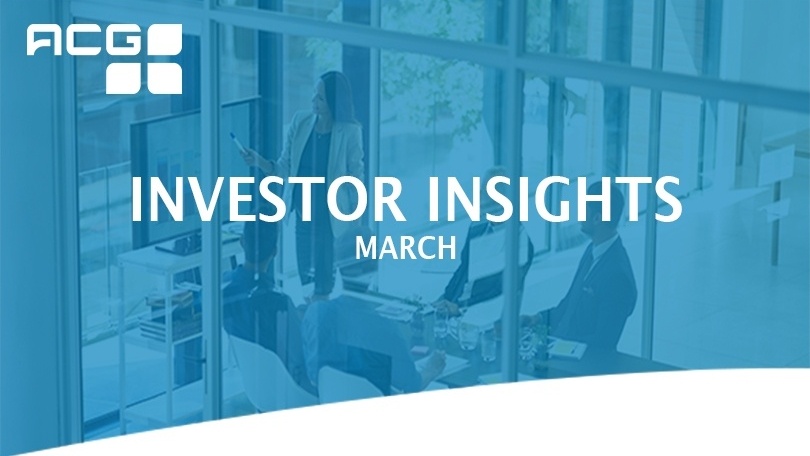 The S&P 500 finished down 3.69, negative for the first time in 15 months during February. The 15 month streak was an all-time record. This index is now positive by 1.83 percent year-to-date.

In the first two months of 2018, there have already been 14 days in which the S&P 500 has gained or lost value by a margin of one percent or more. 2017, which saw record low volatility, only had eight such days all year.

The 10-year Treasury yield closed the month at 2.87 percent. This is an increase from 2.40 percent at the beginning of the year and 2.72 percent at the end of January. The increase in yields has caused the Bloomberg Barclays Aggregate Bond Index to lose 2.09 percent year-to-date through February.

The month of February saw market volatility come back with bang. After peaking on January 26, equity markets began to drop rapidly over the course of the next several days, with the S&P 500 index bottoming out on February 8 just over 10 percent lower than its peak. The VIX, aka the “fear index,” which spent record-breaking time in 2017 below 10, shot up to as high as 50.30 during February. Even after markets began to recover and the panic subsided, the VIX didn’t fall below 15 for the rest of the month. And, while the market did begin to recoup its losses after February 8, it wasn’t enough to bring the S&P 500 back in positive territory by the end of the month. The streak is over: after an all-time record of 15 straight months of positive returns, the S&P 500 finished February down by 3.69 percent. While this newsletter has been calling for higher volatility in 2018, you may have still have been surprised at the strength and suddenness of the sell-off. Below, we aim to uncover the causes of the sell-off and also provide our observations of the market landscape for the rest of 2018.

The causes of the early February decline can be separated into two different categories: that which triggered the sell-off and that which exacerbated it. First, we’ll discuss the trigger—rising interest rates. Rates had been steadily rising through January, but a strong jobs report in early February that showed wage increases accelerating pushed rates even higher due to the implication of wages on inflation and Fed actions. The increase in the 10 Year US Treasury yield was substantial—after finishing the year at 2.41 percent, the yield has risen over 50 basis points in less than two months, peaking at 2.943 percent on February 21.

As for that which exacerbated the sell-off, a handful of factors were responsible. First, large institutional traders that run “quant” strategies that are based on technical indicators were likely triggered to sell equities once the 10-year Treasury yield hit 2.85 percent. Another frequently used selling indicator was triggered on February 2, when the S&P 500 price fell below its 50-day moving average. With substantial capital flowing in and out of markets according to indicators like these, market movements both up and down tend to contain more momentum. A second reason that the sell-off felt so sudden and pronounced was the presence of relatively new exchange traded notes that essentially took short bets on market volatility. When the VIX shot up, these investment vehicles lost billions of dollars which likely compelled those who held them to sell other investments to cover their losses. The most prominent of these vehicles, ticker XIV, was closed in late February after its value fell from over $100 per share to $5 per share in one day. This ETF trade provides a great teaching moment to understand what you own and that there is no “free lunch.” This XIV strategy returned over 80 percent in 2016 and over 182 percent in 2017 but also experienced extreme loses in only one day. Another probable factor is that many investors were likely rebalancing their portfolios to reduce the equity exposure they had accrued over the course of 2016 and 2017. This is often delayed until early in the year to defer tax bills.

On the one hand, it feels like markets have recovered pretty quickly. The S&P 500 rebounded by over five percent from the February 8 bottom and is now positive for the year again by 1.83 percent. Volatility has also calmed down, though it’s still well above its 2017 range. But if you look at the S&P 500 by sector, things don’t look so good. The only sector to finish the month of February positive is Information Technology. Even more remarkable, four out ten sectors, plus the FTSE NAREIT index (a proxy for real estate investment trusts), are down by more than five percent year-to-date. The ProShares S&P 500 ex-Technology ETF, which can be considered a proxy for the index without the tech stocks, is down 4.84 percent for the month and up just 0.12 percent for the year. With companies like Amazon and Netflix pulling index returns higher by being up 29.33 percent and 51.79 percent, respectively, for the year already, it’s easy to miss the real story.

While the lackluster returns in most of the broad market are cause for concern, it’s worth asking the question of, “What has changed in the marketplace?” The economy, as wells as forecasted corporate earnings, still give reason for optimism. The employment picture is strong, and GDP, though revised down from 2.6 to 2.5 percent growth for Q4 2017, is at a good level. Corporations have been issuing positive guidance on their earnings in record numbers, according to FactSet. It’s our observation that there has not been any deterioration in the fundamentals of the economy and markets. Rather, the market sentiment is what has changed, going  from sanguine to paranoid about the pace of interest rate increases. This will likely continue the phenomenon of “good economic news is bad market news.” If wage growth begins to accelerate, or if GDP begins to really heat up, it will renew concern about rates rising too quickly, both as a result of inflation expectations and rate increases on the short end of the curve by the Fed. The newly appointed Fed Chair, Jermoe Powell, suggested on February 27 that markets should expect four interest rate hikes this year, and the S&P 500 promptly finished the day down by 1.30 percent.

We don’t know what the rest of 2018 will hold, but we believe the low volatility and markets only going up phenomenon experienced during 2017 is not the norm and investors should be prepared for and expect more volatility in the future.