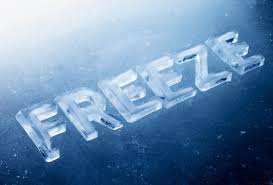 Employers who sponsor defined benefit or cash balance plans may decide one day that the contribution requirements are too high or that they would prefer to provide retirement benefits through a 401(k) plan instead.  In these cases, the companies might “freeze” their defined benefit plans.

There are a number of different definitions of “freezing” a plan.  The purest form is what is known as a “hard freeze.”  This is when a plan is amended to provide no further benefit accruals at all to any employees.  Plan participants keep the vested benefits they’ve earned already but will not earn any future benefits.

Consider a defined benefit plan that pays a monthly pension starting at age 65 equal to 1% of the employee’s highest five years of pay multiplied by the number of years of service with the company.  If Erika is hired at age 35 and works until age 65, she will retire with 30 years of service and will receive a pension equal to 30% of her highest average five years of pay, which let’s say is $80,000.  Her retirement benefit is 30% × $80,000 ÷ 12 = $2,000 per month.

The same thing would have happened if the plan had been hard frozen when Erika was 45.  She would have been entitled to the $375/month she had accrued by then, but not the additional $1,625 she would have accrued over the next 20 years.  In this case, Erika’s benefit is capped because of action taken by her employer (freezing the plan) as opposed to action she herself takes (quitting her job).  The effect is largely the same, though.

Freezing:  What It Isn’t

Often, people hear the term “frozen plan” and think it means something it doesn’t.  Freezing a plan does not necessarily mean that no further contributions need to be made.  Although no future benefits will accrue in a frozen plan, the benefits that have already accrued must still be paid for.

The same administrative requirements exist for a frozen plan vs. one that is not frozen.  Form 5500 must be filed, actuarial valuations must be done, and PBGC premiums must be paid.  These requirements do not go away because a plan is frozen.

Freezing a plan is not the same thing as terminating it.  When a plan terminates, the trust is dissolved and benefits are paid immediately to participants or transferred to an insurance company.  On the other hand, freezing in and of itself does not trigger any distributions from the plan.

That said, freezing is often an interim step toward terminating the plan in its entirety.  Most plans are required to have sufficient assets to pay all benefits before they can be terminated.  Suppose a plan needs $2 million to settle all benefits but has only $1.5 million in assets.  The employer may contribute $500,000 at one time and then terminate the plan.  If $500,000 is more than the company can afford right now, it can freeze the plan and contribute over a period of years until the shortfall is eliminated.

It is possible for a company to freeze a plan with the idea of maintaining it in its frozen state indefinitely, until the last participant is paid out over the normal course of business.  We can think of very few times when this would make sense.  If a company knows it no longer wishes to maintain the plan, it should be terminated as soon as assets are sufficient to pay all benefits.  Should the plan become underfunded again, the company would have to make up the shortfall.  If the plan became overfunded, the company would get very little benefit from having excess assets because of heavy excise taxes on reversions.  There is little upside and lots of downside to this approach.

Although future monthly benefits do not grow in a frozen plan, the actuarial present values of those benefits do change.  All else being equal, the lump sum value of a traditional monthly pension will grow with interest as a participant ages.  The values will fluctuate due to interest rate and mortality table changes.

In a cash balance plan, the notional account balance consists of retirement credits and interest credits.  Assume a plan credits accounts with 5.00% of pay and a guaranteed interest rate of 4.00% per year.  Maurice has an account balance of $100,000.  If the plan were frozen, his account would no longer be increased by the 5.00% pay credits, but it would still grow with interest at 4.00% per year, so that the account value would be $104,000 a year from now – a $4,000 increase in a year despite the plan’s frozen status.

Other steps an employer may take to reduce future benefit accruals are known as “soft freezes.”  Closing the plan to new employees but keeping the benefit formula intact for existing participants is one form of soft freeze.  Other soft freezes include (i) continuing to grant future service credits but capping the pay in the benefit formula to what has been earned already and (ii) continuing to recognize future pay increases but capping the service credits at today’s levels.