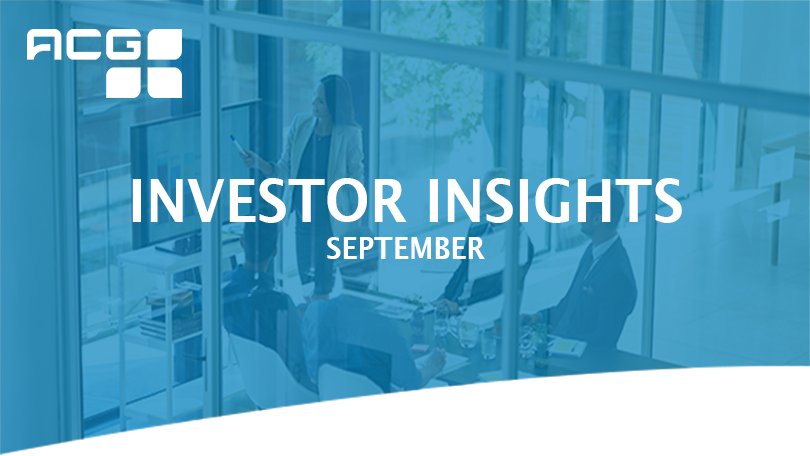 The equity markets saw an uptick in volatility in August and an overall downward trend. The resilient market finished strong but not strong enough to move into positive territory. The bond market saw a significant drop in longer-term rates as investors looked to safe haven investments. The drop in rates was also driven by the Fed’s decision to lower short-term rates at the end of July and the growing concerns around a global recession.

President Trump announced on August 1 that the U.S. would place a 10% tariff on the approximate $300 billion Chinese goods that were not already being hit with a tariff. The markets reacted negatively to this news. A few weeks later the President announced he would delay certain additional tariffs until December 15 so that it would not hurt Christmas shopping for U.S. consumers. Some observers on Wall Street believe this was the President “blinking” in the trade war. China also fired back saying they needed to take action on the President’s initial threat. The trade war threats and counter-threats continued throughout August but near the end of the month both sides made comments about restarting constructive trade talks. The more optimistic discussions at month-end coincided with the shift in market sentiment and the strong finish.

The Fed did not have a FOMC meeting in August, but they did have their annual Jackson Hole Summit. The Jackson Hole event was closely monitored for direction on the Fed’s next monetary policy decision. Summarizing Chairman Powell’s speech, he noted that the U.S. economy was in a favorable place but faced “significant risks” as global growth slowed amid trade uncertainty. He went on the say the Fed “will act as appropriate to sustain the expansion, with a strong labor market and inflation near its symmetric 2% objective.” The Chairman also named other concerns: global economic slowdown, notably in Germany and China, and also drew attention to the rising possibility of a hard Brexit, rising tensions in Hong Kong and the dissolution of the Italian government. Based on the tone of his speech, the market continues to believe another rate cut is likely when officials meet in September.

Comments made by other Fed officials, both voting and non-voting members, suggested some were not convinced that another rate hike was necessary or could help the economy at this point. As we have seen all year, the President continued to tweet and provide the media with comments that he believes the Fed should cut rates aggressively. It has also been rumored that the White House was looking into shuffling Fed governors in an effort to reduce some of Chairman Powell’s power. The White House is also looking into other ways to stimulate the economy; some ideas included a currency transaction tax in hopes it would devalue the dollar or further reducing corporate tax rates. The President also floated the idea of a payroll tax reduction, although he later retracted this statement, citing a strong economy that did not warrant additional stimulus. With so many global economic headwinds, the President is certainly looking for ways to keep this economy growing through the 2020 election cycle.

The queen of England approved Boris Johnson’s request to suspend parliament from September 9 to October 14, restricting time for opposition Members of Parliament to try to block a no-deal Brexit. A public petition quickly garnered 1 million signatures against the suspension and protests broke out throughout the country. The chance of a no-deal Brexit is becoming more likely. For some time this has looked like the only tenable path for Britain to leave the EU. If a no-deal Brexit becomes reality it will be messy both politically and financially. President Trump has said he is ready to make a trade deal with the U.K. as soon as the exit is official.

The protests in Hong Kong have continued to make headlines and negatively impact the Hong Kong economy, as well as others around the globe. The world is closely watching how the Chinese leadership handles this situation. They are in a difficult spot; this situation and the trade war are hurting their economy so they want to have it resolved but they also do not want to show that protesting and standing up against Chinese leadership goes unpunished. This is a significant situation and needs to be considered when looking at all the other rising risks globally.

With Labor Day representing the unofficial end to summer, Wall Street insiders will be getting back to work and trying to determine how this market will close out the third quarter. There are a number of risks to be concerned with, but the U.S. consumer is strong and President Trump will be pushing for any stimulus to keep the economy growing for his re-election campaign. We continue to recommend investors to have an allocation specific to their personal needs and objectives and to stay the course, but be prepared for further volatility.