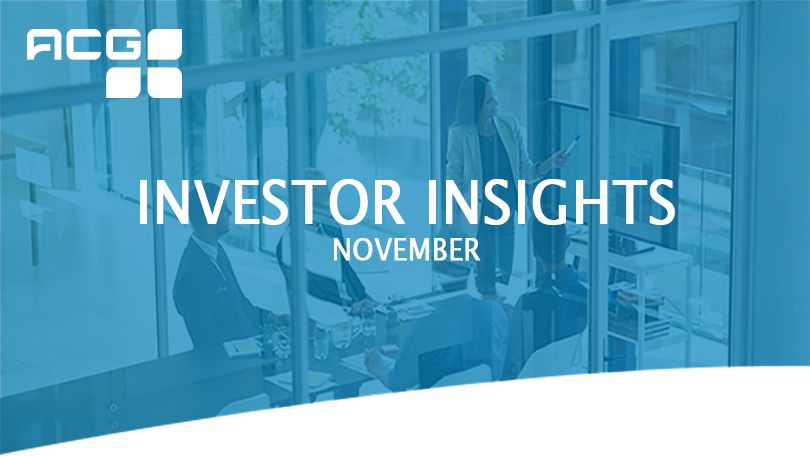 The preliminary reading of third quarter GDP growth in the U.S. was 1.9%. This represented a deceleration in the economy, but still beat consensus expectations of 1.6%.

The Federal Reserve lowered the federal funds rate to 1.75%, its third rate cut in 2019. The Fed’s carefully worded statement seemed to indicate that they don’t plan to cut rates again soon.

The S&P 500 hit fresh record highs in late October, surpassing previous record highs that were made in July. The month of October was a good month for stocks. The S&P 500 returned 2.17% and small-cap companies returned 1.95% in October. Market leadership made a difference in the march to new all-time highs. The market has seen a slight rotation from momentum stocks to value stocks. This rotation has only occurred over a short period, but it is worth watching to see if it continues. The S&P 500 is now positive by 23.16% year-to-date, and the S&P 500 Value is outpacing the S&P 500 Growth for the year. The value index has not outperformed the growth index for a full calendar year since 2016. International markets also had a strong month and outperformed the S&P 500. A contributor to the foreign outperformance was the appreciation of foreign currencies relative to the U.S. dollar. The international developed index, MSCI EAFE, returned 3.59% in October, and the international emerging market index, the MSCI Emerging Market, returned 4.22%.

Short-term yields fell during the quarter while longer-term yields climbed higher, resulting in a healthier looking yield curve. The upward move of longer-term rates created headwinds for the benchmark fixed income index, the Bloomberg Barclays US Aggregative bond index, but it still finished positive by 0.30%. The index is positive by 8.85% year-to-date. Bond proxies with less interest rate sensitivity were positive in October and low quality, more risky bonds, benefited from investors willing to take more risk. The Barclays US Corporate High Yield Index returned 0.28% in October and is positive by 11.71% year-to-date.

The Federal Reserve announced a 25-basis point rate cut on October 30th. This marks the Fed’s third rate cute of the year, after hiking rates 25 basis points in December 2018. The Fed made some slight adjustments to the wording of the statement, causing the market to interpret that the Fed will pause from future rate cuts and monitor economic data to determine if another cut is necessary. There is less than a 25% probability that the Fed cuts during their December meeting. The statement also read that the labor markets “remain strong” and economic activity is “rising at a moderate rate.”

The first reading of economic growth for the third quarter came in at 1.9%. Although this is a deceleration from previous readings, it was above the analyst consensus of 1.6%. The unemployment rate is at a 50-year low of 3.5%. While economic readings have generally been improving, they are not all great. The Consumer Confidence reading missed expectations and were below the September reading, though it is still a strong number at 125.9. Orders to U.S. factories for big-ticket items fell in September by the largest amount in four months. Another concerning reading is in the decline in business fixed investment, which continues to be sluggish.

Trade war fears had waned for much of October, contributing to the upward momentum in the stock market. The optimism was fueled by the announcement of a conceptual deal for a multiple phase implementation, with phase one expected to be signed in November. However, nothing has been formalized. Bloomberg News reported on October 31st that the Chinese are not confident that any deal can be reached. The news story cited that the Chinese were not confident in President Trump’s personality and lacked confidence that he would follow through on the previously agreed upon deal. There are additional concerns that the market does not believe the agreement has any substance and that the long-term wants of U.S. are not achievable given the Chinese culture. Markets suffered a mild sell-off in light of the trade war news.

The economic situation in Hong Kong appears worse than previously thought. After reporting third quarter GDP of -3.2%, which followed second quarter GDP of -0.5%, the Hong Kong economy is in a recession for the first time in a decade. The economy has been crippled by protests, which have caused public transportation disruption and tourists to fear visiting Hong Kong. The trade war and the slowdown of global growth have also contributed to the troubles in Hong Kong.

Over three years ago the United Kingdom voted to leave the European Union, but the country is still figuring how exactly to pull off the massive feat. The most recent deadline, October 31, 2019, once again became unachievable and Brussels provided the U.K. another extension, this time for three months. Before the deadline and any progress towards a Brexit, voters will head back to the polls for a general election in December.