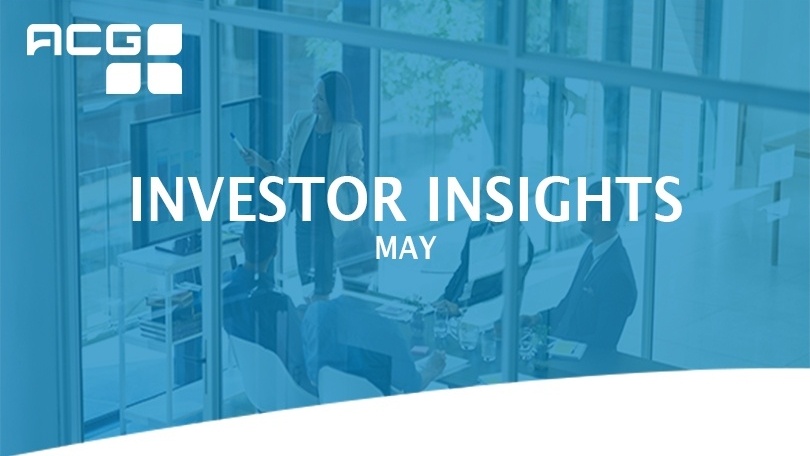 In April the yield on the U.S. Treasury yield closed above 3 percent for the first time since 2013. With interest rates rising due to Fed actions and increasing inflation expectations, many investors are concerned that the era of ultra-cheap credit is over.

As of April 27, the blended earnings growth rate for companies in the S&P 500 during the first quarter was 23.2 percent. This means that the index is on track to report its highest earnings growth since 2010.

The national price of a gallon of regular gas is $2.80, according to AAA, compared with $2.40 one year ago. With oil prices rising significantly during April and the more expensive summer-blend of gasoline on its way, U.S. consumers may find that they have less discretionary income to go around.

Equity indexes were choppy during April but most finished the month with positive returns. In any other month, a 0.38 percent return for the S&P 500 would be somewhat unremarkable. However, a 0.38 percent return viewed in the context of what has started off as a truly stellar earnings season suggests that market sentiment is fragile, and that levels of volatility seen back in early February and mid-March could return at any moment. With economic and corporate fundamentals appearing so strong, what has investors so jittery?

After all, U.S. companies are knocking the lights out with their sales and earnings. According to FactSet, which reported this past Friday with 53 percent of companies of the S&P 500 having announced thus far, the blended earnings growth rate is 23.2 percent (just one month ago, on March 31, earnings growth was estimated to be 17.1 percent). If the actual growth rate for the quarter (known once all companies have reported) remains at 23.2 percent, it will mark the highest earnings growth since the third quarter of 2010. In what can be seen as a direct result of the strong consumer, Amazon shocked market watchers after reporting earnings per share of more than 2.5 times what analysts had been expecting and net income more than double what Amazon saw just last year. Economic news releases in April were also positive, continuing the narrative of a strong economy bolstered by tax cuts and still historically low interest rates. While the jobs number in early April missed expectations, wages, which were announced in the same report, showed solid year-over-year growth of 2.7 percent.  The initial reading on GDP growth during the first quarter also beat expectations by coming in at 2.3 percent (2.0 percent was the consensus expectation). This was the highest GDP growth seen in the first quarter—which is traditionally lower due to seasonal effects—since 2015.

In short, there’s a lot of good news out there. And yet, markets aren’t responding in kind. Of the 21 trading days in April, the S&P 500 saw losses greater than one percent on three different occasions—for perspective, we saw only four such days in all of 2017. Again, in any average month this wouldn’t be remarkable, but juxtaposed with a bevy of great headlines, it merits reflection. We suggest that the cause behind this phenomenon is two-fold: first, that equity markets have simply caught up to the high expectations established in 2017, and two, the persistent threat of rising interest rates.

We have been writing for several months that earning expectations in the U.S. were high going into 2018, primarily due to the strength of the economy and the consumer, but the effect having been compounded by the Trump administration’s corporate and personal tax cuts late last year. These expectations clearly resonated with investors, who saw the S&P 500 return 31.02 percent from the beginning of 2017 through to its all-time high on January 26 of this year. But those returns outpaced earnings. The S&P 500’s 12-month forward price-to-earnings ratio started 2017 at 18.69—above long-term averages but not considerably so. By November of 2017, the P/E ratio had crept up to 21.68, even with the promising earnings guidance put out by companies and the analysts that track them. With the index slightly negative so far for 2018 and continued strong earnings guidance, the P/E ratio has come back down to a more reasonable level of about 16.3. Investors will pay careful attention to guidance put out by corporations to see if this earnings growth is sustainable enough for stocks to grow without significant P/E expansion. According to FactSet, analysts are currently projecting earnings growth of 19.4 percent for all of 2018.

The other cause for market volatility is, as it has been since early February, concerns about rising interest rates. The yield on the 10-year US Treasury closed above three percent on April 25, a level we have not seen since the so-called “Taper Tantrum” of 2013 when then Fed Chair Bernanke signaled the end of the Fed’s Quantitative Easing program, roiling markets. Rising interest rates are an inevitable aspect of strengthening economies, and while the movement should be seen as a positive indicator of economic health, the speed of interest rate increases will continue to be a concern for equity investors. The fear is that, with consumers and corporations having benefitted from a decade of historically low cost of borrowing, tightening credit conditions could dampen future growth. Expect to see volatility continue to rear its head as bell-weather interest rates hit nice round numbers like the 10-year treasury yield hitting three percent. Three percent isn’t a particularly insightful number from a fundamental standpoint, but it presents a psychological landmark for those used to the days of easy credit.

The current market conditions may leave investors unsure whether their portfolios are positioned appropriately. Investors with lower risk profiles likely hold a large amount of bonds and other types of fixed income investments in their portfolio, and rising interest rates have left most major bond indexes negative year-to-date. It’s critical to keep in mind the primary role of fixed income, which is to diversify away from equity risk. When—not if—equities sell off, fixed income can be expected to act as a ballast in the portfolio against more extreme losses.