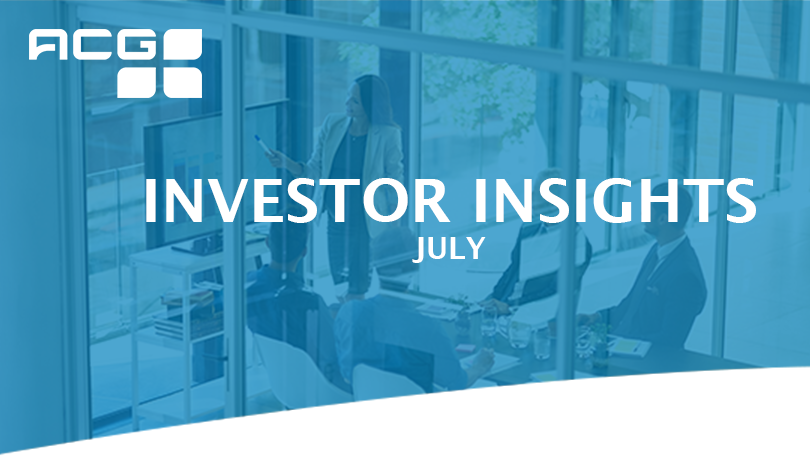 The yield on the 10-year US Treasury finished June at 2.00%, its lowest monthly close in years.

The price of one Bitcoin surpassed $13,800 during the mont of June, the highest level reached since January 2018.

Equity markets roared back in June after their large sell-off in May. The S&P 500 picked up a 7.05%  return and a new all-time high, closing on June 20 at 2,954.18. Developed and Emerging Markets abroad also had good months, each with index returns that topped 5.00%, though both continue to lag large cap stocks in the U.S. year-to-date. Fixed Income also had a good month after interest rates fell still further. The yield on the 10-year US Treasury finished June at 2.00%, having fallen as low 1.98% late in the month, the lowest it has been since before Trump was elected in 2016. The Bloomberg Barclays US Aggregate Bond Index rose 1.26%.

The driving factor of these market movements was, without a doubt, the new expectations for Fed interest rate policy. While additional rate hikes in 2019 have been off the table since January, the prospect of a rate cut this year seemed unlikely until recently. The language from the FOMC has steadily evolved over the past few months to signal an increasing willingness to reduce the target rate from its current range of 2.25% - 2.50%. In its most recent statement, issued in June, the committee dropped the word “patience” in describing how it would react to signs of economic softening and reiterated its willingness to use policy to “sustain the expansion.” Last month the CME FedWatch Tool placed an 80% probability on the Fed keeping rates steady in July. Now, that has dropped to 0% with about a 75% likelihood of a 25 basis point cut and a 25% probability of a 50 basis point cut. This shift has been dramatic, and both equity and fixed income markets reacted accordingly.

Whether the Fed should cut interest rates is a different conversation than whether it will. As a reminder, the Fed has a dual mandate to 1) keep unemployment low and 2) keep inflation in check, at or near a 2% annual increase. Despite a weak jobs report earlier in June showing that only 75,000 nonfarm payrolls were added in May, the labor picture remains strong. Unemployment, at 3.6% nationally, is at its lowest point in decades. Even with the lackluster jobs number from May, the average monthly addition over the past six months is 195,000 jobs per month. In other words, the labor market does not appear to need lower interest rates at this time. What about inflation? The Personal Consumption Expenditure index (PCE), the Fed’s favored measure of inflation, has been softening somewhat, coming in most recently at 1.5%. While this is a downward trend that the Fed may point to as a reason to cut, inflation has been persistently weak throughout this business cycle and it’s no clearer now that weak inflation this Spring is any different from the weak inflation witnessed over the past decade.

If neither the labor market nor the inflationary environment are driving us toward a potential rate cut, then what is? The most charitable interpretation of the Fed’s new course of action is that it is concerned about an economy that will begin to soften more noticeably in the coming months. After all, monetary policy is believed to have a delayed impact, with interest rate changes not felt “on main street” for months after they are implemented. This fear of economic slowdown, which Fed Chair Powell has said could be exacerbated by trade tensions with China and others, may be the Fed’s best defense if it chooses to cut rates. However, this would represent a clear departure from the “data-dependent” methodology that the Fed has claimed to be operating on for years. There are rarely periods in an economic cycle when the horizon is completely clear of threats that could end an expansion. This time should be no different, regardless of the expansion’s age.

More likely, the Fed is reacting to external pressures. It is difficult to ascertain what, if any, influence the threats made by President Trump are having on this shift toward rate cutting. Chair Powell has made repeated efforts to reassure those watching of the Fed’s independence from the executive branch, but that may just be talk. While Trump’s role in the Fed’s decision-making is up for debate, we can assert with confidence that the Fed has become hyper-sensitized to the stock market. Prior to the sell-off that roiled markets during the fourth quarter of last year, the CME FedWatch Tool placed a 99% probability of rates being at their current level or higher by the end of 2019, with nearly a 25% probability that the Fed would hike rates at least three additional times. Cue the 20% decline in the S&P 500, and by January 3rd the probability of any rate hike had dropped to 0%. The economic outlook did not significantly change, but the stock market did.

If the Fed cuts rates this July, it will be difficult to conclude it will be for any reason other than for the expectations of investors. It has always been somewhat contrived for the Fed to pretend it is immune to the whims of the market—after all the market’s behavior is a discounting mechanism for what investors expect 6-12 months down the road. Market movements affect business and consumer sentiment, and that sentiment trickles through to tangible economic outcomes. It should be a factor for the Fed—but it should be an appropriately weighted factor.

Investors will find out on July 10 what the Fed plans to do. If the Fed holds rates steady—whether out of an authentic loyalty to its actual mandate or just to retain a shred of independence from Trump or the stock market—it will likely cause stocks to sell-off. Stock returns have been so strong in anticipation of a rate cut that markets might sell off any way from being overbought. Further complicating both the market’s reaction and the Fed’s decision is the trade tension with China, a story that produced fresh content on the last Saturday of the month when Presidents Trump and Xi held an extended meeting at the G-20 summit. The outcome of that meeting appeared favorable as both Trump and Xi agreed not to impose additional tariffs. The importance of getting closer to a deal, with its impact on global economic growth, should not be overlooked. However, it remains unclear, given Trump’s penchant for reversals, whether the U.S. is close to the finish line on trade.