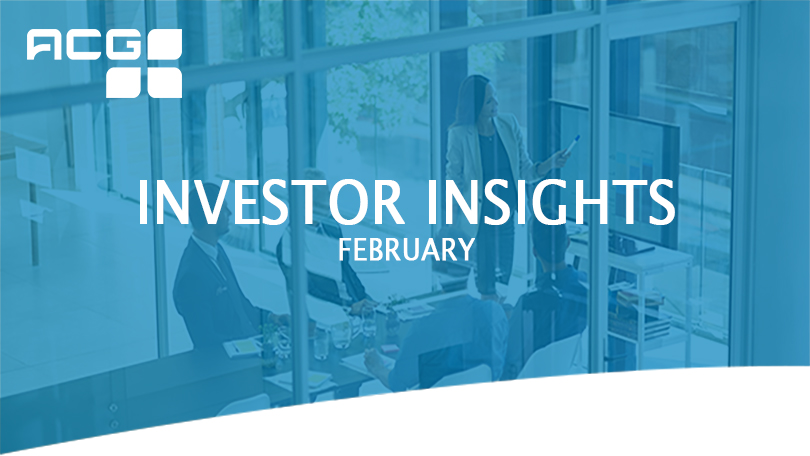 The yield on the U.S. 10-year Treasury rose significantly in January, finishing at 1.09% after finishing the prior month at 0.917%.

The S&P SmallCap 600 led the broad market in January, returning 6.29%. The small-cap index is now outperforming the large-cap index over the trailing 12 months, after lagging substantially for most of 2020.

The S&P 500 lost 1.01% in January, its worst month since October. The month got off to a strong start, supported by a higher chance of more robust stimulus due to the Democrats’ win in Georgia, the promise of a strong earnings season, and a Fed that continues to show every sign of remaining accommodative for the foreseeable future. The rally saw U.S. small-caps, emerging markets and U.S. mid-caps lead other stock asset classes, in that order; this is an encouraging trend for those groups of stocks that trailed significantly in 2020. While the market was likely overdue for some volatility anyway—consider that the S&P 500 gained over 18% from November 1st through January 26th and that the small-cap index gained over 41%—the catalyst for the last week’s volatility was clearly the clash that arose between a group of mostly amateur retail investors and the Wall Street establishment. Usually our newsletter aims to provide a broad overview of factors that have been and will be driving the markets, but considering the novelty and potential implications of the of the short squeeze event that drove stocks like Gamestop, AMC and Blackberry far above their justified values, the rest of the newsletter will focus on that.

In a coordinated effort that snowballed in its impact once it gained media attention, a group of retail investors on the internet forum website Reddit began buying up shares of some of the most shorted stocks on Wall Street. When a stock is sold short, the investor borrows the shares from a prime broker and sells it with the hope to buy it back at a lower price for a profit. In the case of heavily shorted stocks, it is common for the “short interest” to be greater than the number of actual shares in existence. An analogy, though imperfect, is that banks regularly have less cash on hand than would back up the value of all its depositors’ accounts because banks are loaning out a certain percentage of that capital to borrowers. Short squeezes, like the one initiated through the Reddit forum, are somewhat like a run on a bank. More buyers are seeking more shares than are available, thus driving the price up substantially. Shares of Gamestop (which had a short interest as high as 138% of its available floated shares) were worth $4.34 per share as of the end of June last year but more than quadrupled in value by the end of the year to $18.34. The stock continued its meteoric rise throughout January, and the short squeeze became essentially the only story in financial media by the last week of the month. The increased attention brought in a broader set of participants, accelerating the rise in price and thus magnifying the losses of short sellers. Additionally, when short sellers decide to exit, or “cover” their short position, they do so by buying the stock, driving the stock price up even further. According to one estimate, Gamestop short sale losses by the end of the month were approximately $19 billion, with the shares of Gamestop hitting a high of $380 per share, or more than 95 times its mid-2020 level. The hedge fund Melvin Capital required a $3 billion lifeline from other hedge funds in order to remain solvent. While Gamestop stock was the flagship of this short squeeze campaign, several other stocks with significant short interest were also swept up in the fray.

The phenomenon quickly became a matter of contentious debate and moral outrage, with the Wall Street camp criticizing the short squeeze as dangerous and destructive speculation. Meanwhile, the short squeezers claimed such criticism was hypocritical, especially from the hedge fund world which has the reputation among some for market manipulating tactics. The conversation grew more acrimonious after the main brokerage used by the short squeezers, Robinhood, and others halted buy trades of the affected stocks on January 28 because of the brokers’ inability to efficiently meet the orders. Trading was reinstated on Friday and the shorted stocks began rocketing higher again. As this newsletter is being published, it appears that the rally of shorted stocks is largely continuing, although mitigated for some by a new set of trading limitations from brokerages like Robinhood.

One might ask why it matters that the stocks of some ill-favored companies are seeing exponential growth rates and causing some hedge funds to lose some money. After all, most investors don’t entrust their money to these hedge funds, anyway. However, the problem is that these financial institutions can inadvertently impact the health of the overall capital markets. In the same way that a recession in one country can drag down growth in its neighbors, big losses by hedge funds can spread fear and volatility around the market. As these funds are compelled to raise capital by selling out of other positions—potentially in long positions of stocks they favor—in order to cover their short positions in stocks like Gamestop, they can create downward pressure on the market. Since the potential loss on a short sale is unlimited, this dynamic does not have a clear endpoint. Investors should also realize that although they may not invest directly in hedge funds, a large number of Americans are still impacted by hedge fund investment performance because they are commonly used in pension funds, which provide income to millions.

The need for hedge funds to cover their short positions undoubtedly played a role in January’s month-end stock decline, where the S&P 500 fell by 3.64% from the 26th through the 29th. In addition to that, though, we think a general sense of uncertainty has entered the market regarding what this coordinated short squeeze means for investors going forward. Never has such a broad-based and largely anonymous group of investors been able to manipulate (let’s call it what it is) stock prices.

In assessing the practical impacts to the average investor—average meaning the type who seeks long-term growth and income through a diversified portfolio—it is important to contextualize the Gamestop short squeeze to retain perspective while also recognizing the potential change it could bring. For context, investors should be reassured that Gamestop and the rest of the involved stocks were uniquely susceptible to this influence because of the high amount of short interest against them, as well as the thinly traded nature of their shares. A comparable move against Apple stock, for example, would be much more difficult, if not impossible, for retail traders to pull off via the same methods. On the other hand, barring new regulation from Congress or the SEC, there doesn’t seem to be a mechanism to prevent the short squeezers from continuing their campaign—even if it means moving onto other similar stocks beyond Gamestop. For now, at least, the best chance of this stopping is for hedge funds and other financial institutions to adapt their approach to short selling to be less vulnerable to this sort of thing.

In the meantime, average investors can protect themselves by controlling risk in their portfolio. This is done first and foremost by limiting stock exposure to a level that the investor finds comfortable; this mitigates the impact of volatile markets whether they are caused by short squeezes or anything else. Secondly, the type of stock exposure is important, too. Are you buying passive ETFs that track indexes? If so, there’s a decent chance you own Gamestop and other shorted stocks and are thus set up for more volatility. Conversely, we’ve been firm believers of actively managed investments for years, and if this phenomenon is here to stay, it is yet another reason to have a professional picking which stocks to include in your portfolio. This story, like others, will be lost in the media news cycle sooner or later and markets will begin to focus on other headlines. This does not mean the threat of it happening, potentially in a more harmful way, will have dissipated.