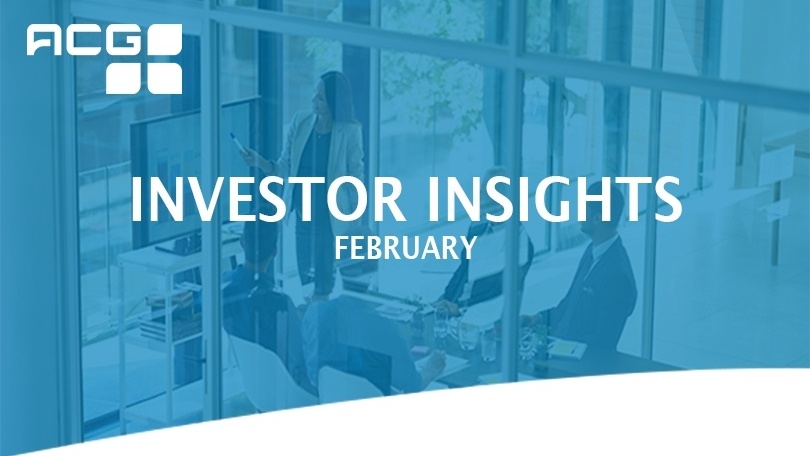 The S&P 500 posted a return of 8.01 percent in January. This is the best calendar month return since October 2015.

The S&P GSCI Crude Oil spot price of a barrel of crude oil increased by 18.45 percent in January, closing at $53.88 per barrel. It is still down over the trailing 12 months by 16.9 percent.

The NASDAQ composite was positive in January by 9.79 percent, which is its best calendar month since October 2011.

2019 got off to a hot start in January for both the equity and fixed income markets. All major asset classes were positive, with small cap value stocks leading the pack at a return of 12.30 percent. Mid cap value stocks were close behind, while the rest of the U.S. equity classes posted returns in the high single digits. The S&P 500 returned 8.01 percent. International equities had a great month, too; developed and emerging markets saw returns of 6.59 percent and 8.78 percent, respectively. Fixed income investments fared well after struggling throughout 2018—the Bloomberg Barclays US Aggregate Bond index was positive by 1.06 percent (for bonds, that’s a great one month return). High yield bonds were up by 4.52 percent. Interest rates ended the month pretty much where they started—The 10 Year U.S. Treasury yield started at 2.65 percent and finished at 2.63 percent—as expectations from the Fed, and the Fed’s Jan. 30 statement, kept downward pressure on rates.

There are two storylines that are worth discussing at the end of this month. The first is what drove returns, absent any real change in the news, for the first 30 days of the month. The second is a recap of the Federal Reserve’s statement on Jan. 30 and what it means going forward.

January saw the best monthly return for the S&P 500 since October 2015, but this was not a result of remarkably bullish news that occurred during the month. If anything, fourth quarter earnings announcements have been a disappointment so far. According to FactSet, the decline in earnings forecasts for the first half of 2019 has been the largest decrease since the first half of 2015. There were some positive headlines around trade tensions, and the month ended with both sides indicating a Trump-Xi meeting in February, but it’s a stretch to say that any real progress has been made toward a final resolution. A three-week ceasefire ended the government shutdown, but equity returns were strong even in the midst of the shutdown when no end seemed in sight. Thus we can reasonably attribute January’s strong month to a reversal of December’s overly-pessimistic selling. The past two months are a great reminder to investors of the importance of staying invested through periods of sharp declines, as some of the biggest daily and monthly returns in the market have historically occurred on the heels of such declines.

As previously mentioned, markets were already on track for a great month heading into the Jan. 30 release of the Fed’s policy statement and press conference with Chair Jerome Powell. General consensus had already anticipated a more dovish communication following Powell’s destabilizing comments in December. But even those forecasts of dovishness didn’t do justice to the fuel that Powell poured on the fire on Jan. 30. As expected, the Fed refrained from hiking the federal funds rate from its current range of 2.25-2.50 percent. However, the released statement, which is closely monitored by observers for any change in the language, left many Fed watchers interpreting new guidance as suggesting the Fed won’t hike rates at all in 2019. This would represent a change from prior expectations in which the consensus thought the Fed would raise rates twice in the second half of 2019. The statement also added a new paragraph addressing guidance on the reduction of the Fed’s balance sheet. Readers may recall the alarm caused last month by Powell’s stating that balance sheet reduction was essentially on “auto-pilot.” The market reaction clearly caught the Fed’s attention, as the guidance now suggests that the Fed is open to slowing or halting balance sheet reduction in the event that its main policy tool, the federal funds rate, is insufficient.

It's worth pointing out that the Fed didn’t explicitly state no rate hikes would occur in 2019, and on Jan. 31 the former president of the Atlanta Fed, Dennis Lockhart, suggested he thought that “a number of the members of the committee” would like to see one or two hikes this year. Suffice to say that at this point it’s not totally clear what the Fed will or won’t do in 2019, which is frustrating because the Fed’s ability to provide forward-looking guidance is a form of monetary policy in-and-of-itself. It’s common for Fed chairs and markets to experience communication issues in the early years of a new chairmanship. Whether Powell is muddying the waters on the current path, or trying to gently usher in a new path, is up for debate.

As earnings season wraps up in February, we expect that markets will continue to focus on reading the Fed’s tea leaves while also hoping for meaningful progress in U.S.-China talks. If talks to keep the government open fail, a new shutdown may also provide headwinds for stocks. While sentiment appears to be positive again, it also appears fragile. Investors would do well to heed the lesson of the whipsaw in returns over the last 60 days, and keep in mind that while these monthly updates are meaningful to stay informed, it’s imprudent to attempt to time investing based off of these short-term changes.