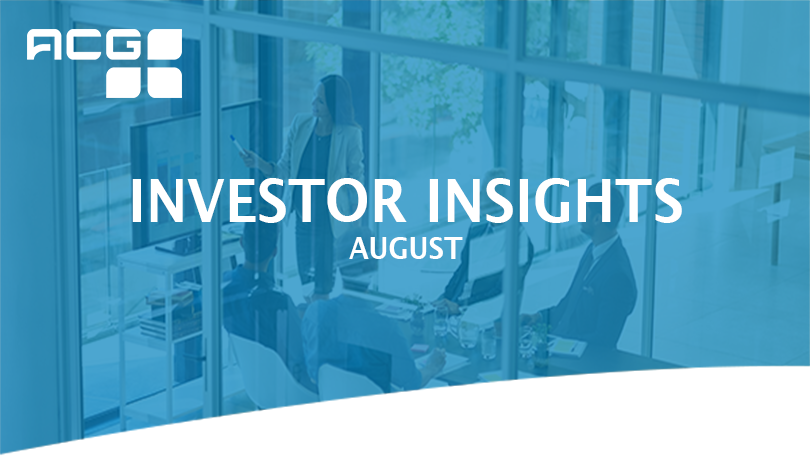 US Gross Domestic Product (GDP) contracted at an annualized rate of 32.9% in the second quarter according to preliminary estimates. While it was the worst reading ever, it beat the consensus forecast of -34.1%.

The equity markets continued to post outstanding returns during the month of July, as investors increasingly shrugged off the economic struggle of today as a temporary blip. As we’ve said in the past, the stock market is a forward-looking metric, and it is clear that investors see a return to profitability for most companies in the not too distant future. The S&P 500 was positive by a whopping 5.64% in July and is now positive for the year by 2.38%. While it was a great month for the broad large-cap index, the growth side once again outperformed the value side, with the S&P 500 Growth and Value indexes returning 6.99% and 3.66%, respectively. Growth outperformed Value at the mid- and small-cap market sizes as well. The biggest winner of the month, however, was the Emerging Market (EM) asset class. The MSCI EM index returned 8.94% during July and is now only negative for the year by 1.72%. The returns in EM were led primarily by China and Brazil. While the weakening of the U.S. Dollar (USD) contributed to the strong return of EM, the impact was limited to about 80 basis points. Fixed income also performed well -- the Barclays Aggregate Bond Index gained 1.49% -- as interest rates in the U.S. fell.

While the equity markets in the U.S. are rallying primarily on the expected transience of the COVID-19 impact, investors were encouraged by much better than expected corporate earnings results. According to FactSet, by the end of July 63% of companies in the S&P 500 had reported their Q2 results. Of those who have reported, 84% have reported earnings above analyst estimates. This surprising rate of positive earnings is on track to be the highest rate since FactSet began tracking the metric in 2008. It is not just the number of companies beating estimates, however, but the degree by which they are beating them. FactSet reports that companies are beating their earnings estimates on average by 21.8%. This estimate is also on track to be the best such data point for the metric since FactSet began tracking it in 2008. The earnings season has been another great example of the market truism that returns aren’t really driven by news that is “good or bad” but rather whether news is “better or worse” than the prior expectation. After all, Q2 earnings are still on track for a year-over-year decline of -35.7%. This is terrible in absolute terms, but the decrease in profitability is now seen as shorter-lived and less severe than originally expected in the fearsome days of March.

The month of July was also notable for the weakening of the USD: on June 30th, one euro was worth about $1.12 USD. By the end of July, one euro was worth about $1.18 USD. The US Dollar Index, which tracks the value of the currency against a basket of other currencies, lost 4.15% in July. While a negative 4.15% return doesn’t seem like much in comparison with the extreme equity returns we’ve seen this year, it is a huge loss by currency standards and is the biggest one month decline for the USD since September 2010. The weakening dollar can be attributed to a handful of near-term developments, including the relatively poor handling of COVID-19 in the U.S. vs. most other developed countries, the significant stimulus rolled out by the European Union on July 21st, and the declining yields on offer from U.S. Treasuries. However, the July move also aligns with a longer-term cycle investors have observed for decades—every ten years or so marks a new era of the USD weakening or strengthening vs. other currencies. Rewind to April 2011 and you’ll recall that one euro was worth $1.48 USD. The dollar has strengthened considerably in that time and approached parity (a 1-for-1 value) in the wake of Donald Trump’s election. It could be that the strengthening cycle of the past ten years is over and that we’re entering a period of long-term dollar weakening. While this would be bad news for those Americans who enjoy travelling abroad, it is good news for U.S. companies that rely on exports, and for U.S. investors with international exposure. When investors repatriate their monies formerly invested overseas back into dollars, the relative increase of an international currency vs. the USD contributes to their investment return. This phenomenon hurt U.S. investors in the recent decade as the dollar gained value, but perhaps it is now changing.

Political and policy developments were insignificant in July but should loom larger from August through November. Congress is still haggling over what the next COVID-19 relief stimulus will look like, even as the $600/week unemployment insurance subsidy dried up at the end of July. Should there not be agreed-upon replacement for that subsidy in the next bill, it will be interesting to see if consumer spending will be damaged significantly. On the election trail (or what counts for it this year—Biden’s basement?) Trump is still significantly lagging Biden in both the national polling and most of the pivotal swing states. Additionally, polls are showing a higher likelihood of a full Democratic sweep (not only the presidency but keeping the House and taking the Senate) than has existed at any point in this election cycle. Of course, we always caveat such observations with the acknowledgment that polls are imperfect -- the 2016 elections were a great example -- but they remain the best tool available for forecasting election results. As the horse race enters its final three months it is likely that markets will not handle the uncertainty well.