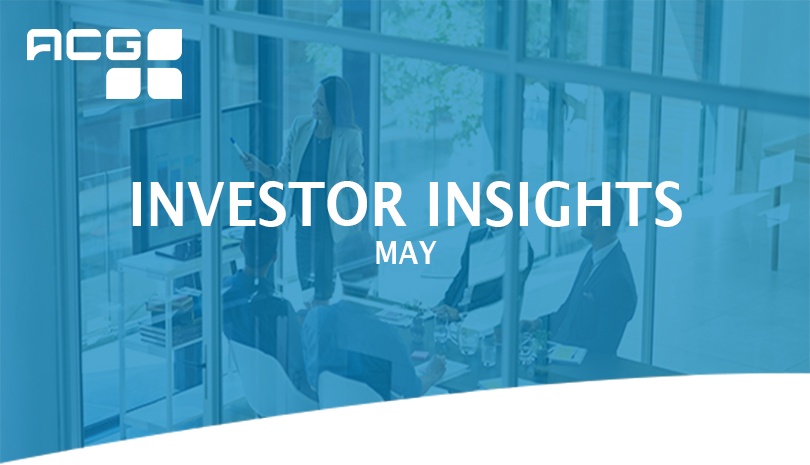 As of April 30, FactSet reports the first quarter year over year earnings growth for companies in the S&P 500 was on track to be 45.8%. This is nearly double what the forecast was just one month ago, 23.8%.

First quarter GDP increased at a 6.4% rate, the second-fastest pace for growth since the second quarter of 2003.

The Biden administration has proposed $6 trillion in new spending within the first 100 days of its existence, with the $1.9 trillion American Rescue Plan already passed as well as the proposed infrastructure ($2.3 trillion) and the Families Plan ($1.8 trillion).

April was a fun month for investors. Unless you run a short strategy and bet against the market, chances are that whatever you owned made money. The S&P 500 gained 5.34%, and mid and small caps gained 4.5% and 2.04%, respectively. International markets also plowed ahead, with the developed index gaining 3.01% and the emerging market index gaining 2.49%. Bonds, which had just suffered their worst quarter since 1981 (if you’re looking at the main bond index, the “Barclays Agg”), enjoyed a strong rebound by gaining 0.79% although they are still negative for 2021. The equity markets were led by large cap growth stocks—the S&P 500 Growth gained 6.87% -- as the “great rotation” from growth to value that began last November paused in April. Growth benefitted from blow out earnings announcements from some of the asset class’ heavy hitters like Alphabet, Amazon and Apple, as well as the modest decrease in interest rates (in the first quarter, the significant increase in rates had forced investors to reevaluate their growth expectations for such companies). The Real Estate sector was also a leader in the market during April, gaining 8.28% for the month, benefitting primarily from still-historically low rates, an accommodative Fed, and a clarifying of the outlook as the economic reopening continues to take shape. As we’ve written in recent months, with Covid-19 waning, cheap money from the Fed, massive government spending, and all-time record growth in earnings, the table has been set for a bullish market environment. Accordingly, stocks have already gained in four months what most investors would be happy to see in a full year. This has left some market observers asking, “Is this as good as it gets?”

The stock market has never been a reflection of how things currently are, but rather how things are expected to be in the future. Furthermore, stocks tend to react to positive or negative changes in outlook rather than the outlook itself. As new information either enhances or detracts from a forecast, stocks typically respond in kind. Recognizing that dynamic, let’s take stock of where we sit today.

First let’s take the Fed. Fed Chair Jerome Powell spoke most recently on April 28th , addressing the ongoing debate of when the Fed will raise rates and begin tapering its $120 billion per month quantitative easing bond buying program. While there are outlier views on Wall Street, the most prevalent view is that the Fed will not begin to taper QE until at least the end of 2021 and that the FOMC rate will be held at the zero lower bound until at least the end of 2022, with some analysts suggesting the Fed won’t raise rates until well into 2023 or later. It will take time for Fed watchers to get used to reading forward-looking guidance from the Fed considering the Fed’s notable shift in the interpretation of its inflation mandate. Whereas previously the goal was to simply target 2% inflation, the Fed announced that it would be comfortable with inflation running above 2% if the trailing data traces its 2% target on average. To summarize, the Fed is looking for every reason to stay hyper-accommodative for as long as possible; the market recognizes this and has responded accordingly. Any change in the Fed outlook must be, almost by definition, more restrictive and thus negative for stocks.

Next, consider the earnings picture. According to FactSet, as of April 30 the companies in the S&P 500 are on track for year-over-year earnings growth of 45.8%, the highest year-over-year earnings growth since the first quarter of 2010 (60% of companies have reported so far). This is nearly double what analysts were estimating just a month ago for Q1. The year-over-year earnings growth has been led by the Consumer Discretionary (181.6%), Financials (133.7%), and Materials (57.1%) sectors. To quote FactSet, “The unusually high growth rate is due to a combination of higher earnings in Q1 2021 and an easier comparison to unusually weak earnings in Q1 2020 due to the negative impact of COVID-19 on numerous industries.” Is it possible for the earnings situation to continue improving at the pace we’ve seen? Sure, but we’d say it’s unlikely. While growth should remain above-trend for a while, a deceleration of that growth is pretty much inevitable. If that happens, a cooling in the stock market is likely in order.

Finally, examine the outlook for fiscal stimulus. The Biden administration has already passed the $1.9 trillion stimulus relief and laid out plans for a $2.3 trillion infrastructure bill as well as a $1.8 trillion effort to reshape the economy and education in the “Families Plan”. Those eye watering amounts represent a significant amount of potential stimulus in the near term (the length of this newsletter doesn’t allow for handwringing about the long-term impact on the national debt). It’s tough to say how much of the two remaining pieces of legislation the market is already baking into its returns, but history suggests that ambitious bills like these tend to get watered down before they pass, if they pass at all. If markets are too reliant on fiscal stimulus projections, the political sausage-making over the next several months may create volatility.

Markets have had an incredible start to 2021. While we love to see strong returns and growing wealth for investors, we caution readers to stay grounded and disciplined with their portfolios. When most of us think about managing emotions as investors we tend to think about it in the context of staying calm when markets are falling. Avoiding the greed and euphoria that leads to excessive risk-taking during times like this is just as important.