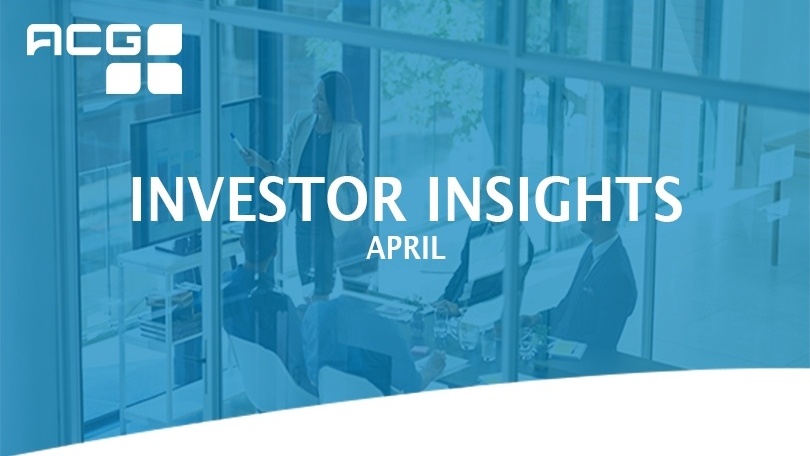 The Jobs Opening and Labor Turnover Survey (JOLTS) reported that as of the last day of January there were 6.3 million open jobs, up from 5.6 million in December and 5.4 million from January 2017.

The CBOE Volatility Index, or VIX, finished March at 22.87.  The so-called “Fear Index” has been on the rise through much of the first quarter after being at historical lows throughout much of 2017.

The market (as represented by the S&P 500 index) has suffered consecutive monthly declines for the first time since January/February of 2016, and its first negative quarter since the third quarter of 2015. The S&P 500 lost 2.54 percent during the month and 0.76 percent during the quarter. Small cap companies, who will be less impacted by a trade war, had a positive month (the S&P SmallCap 600 index was positive by 2.04 percent) and also finished the quarter in positive territory, up 0.57 percent. International markets outperformed the S&P 500 both during the month and quarter. Developed international indices were negative for both the month of March and for the first quarter, but emerging markets were able to post a positive quarterly return despite a negative March.

After a steady rise in the yield of the ten-year Treasury bond during the first two months of the year, yields retreated slightly in March. The ten-year treasury yield fell to 2.74 percent in March from 2.87 at the end of February. As a result, most fixed income (bond) proxies had positive returns for the month but had a negative quarter.

The uptick in volatility seen during January and February continued into March. After seeing some market stability during the latter part of February, markets quickly went on the defensive when President Trump announced that he would be putting tariffs on steel and aluminum imports. The announcement of the tariffs were widely debated and criticized by many economists, and ultimately led to the resignation of Gary Cohn, the President’s chief economic advisor and Wall Street ally. The fears of a trade war caused market declines and now trade wars are the top economic concern for the markets.

The Fed, led by new Chair Jerome Powell, announced a quarter percent rate hike which is the sixth rate hike of this rising interest rate cycle which started in December of 2015. The Fed continued to point out the strong economic conditions in the U.S. economy, and the baseline forecast calls for three rate hikes this year, however, Wall Street analysts are beginning to forecast a higher probability for a fourth increase in 2018.

The final reading of the fourth quarter U.S. GDP growth was revealed in March to be 2.9 percent, which was better than the expected growth rate of 2.7 percent. The GDP report was supported by strong consumer spending. Growth in spending increased by four percent during the fourth quarter, the quickest pace since the fourth quarter of 2014. Consumer sentiment fell during the second half of March but still finished at its highest level since 2004. On one hand consumers are feeling optimistic about tax reform, but on the other hand they are concerned about the effects of trade tariffs. The unemployment rate remained low, while inflation indicators are stable but still below Fed targets. Personal incomes have increased by 0.4 percent for three consecutive months.

The economy remains strong, earnings are expected to be very good and the recent market decline has made valuations very attractive. There remain some concerns, mainly the risk of trade wars and the speed of the Fed’s rate hikes. We are hopeful that President Trump’s announced tariffs amount more to a rhetorical negotiating tactic rather than the opening salvos of a damaging trade war. Meanwhile, the Fed appears to be measured in its approach and it seems unlikely to blindly raise rates if other indicators, primarily inflation, are keeping the longer maturity rates too low. We believe these risks are serious but not detrimental to the continuation of stock market gains. There are enough positive reasons to be optimistic for stock market returns, but the heightened volatility should serve as a reminder to investors of the importance of taking appropriate levels of risk.