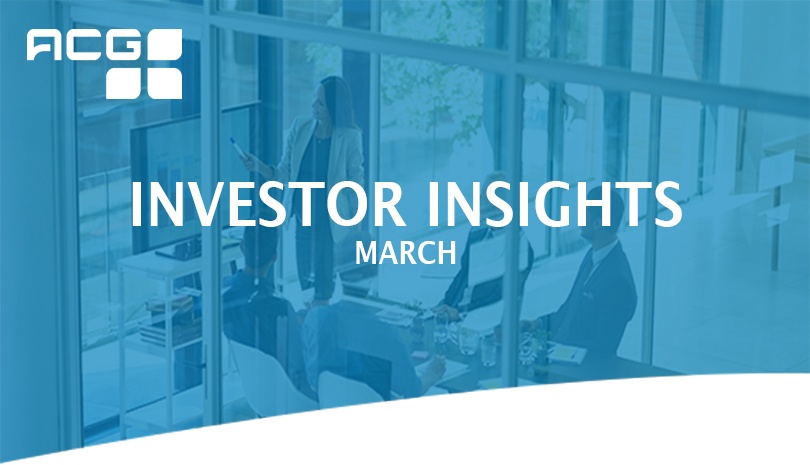 100 The price of a barrel of oil crossed the $100 threshold in February for the first time since 2014 as the Russian invasion of Ukraine spiked commodity prices that were already on the rise.

-30.3 U.S. Investor Sentiment fell to its lowest level since 2013, -30.3%. as measured by the American Association of Individual Investors. Investors may find a silver lining in this; when sentiment has been at extremes in the past it is usually a reliable indicator that markets are about to turn around.

9.1 Corrections are never fun to experience, but investors should keep in mind that the average 12-month return following the last 10 corrections in the S&P 500 has been 9.1%. Investors did not get any relief from the markets in February. Both stocks and bonds continued to get punished. The S&P 500 fell as much as 7.06% during the month and entered correction territory (classified as a 10% or greater decline from the all-time high it reached on January 3) before ending the month down with a 2.99% and a year-to-date loss of 8.01%. February’s losses traced many of the same lines from January as we described in last month’s newsletter: growth stocks lost much more than value stocks, and the energy sector led the market, in fact it was the only positive sector in February. The main difference between the rout we saw in February compared with January was that small and mid cap stocks performed much better than large cap stocks. The primary reason smaller companies did better in February is likely that geopolitical crises like Russia’s attack on Ukraine typically have a greater impact on large multinational companies compared with smaller companies whose economic concerns are more insulated. Bond investors weren’t happy either, as the main bond index, the Bloomberg U.S. Aggregate, lost 1.12% in February and is now negative year-to-date by 3.25%. This is the worst two month start to a year for that bond index since 1980.

Stocks spent most of February in an orderly downward trend, but the intensity picked up in the middle of the month as the Russia-Ukraine crisis built to a crescendo. By the time Russia formally attacked Ukraine on February 24th the S&P 500 had already fallen into correction territory. Many investors might have been surprised that, despite markets opening on the day of invasion with significant losses, stock indexes finished the day higher, and a huge gain followed the subsequent day on the 25th. However, this is in fact a common phenomenon in the market. Whenever there is a prolonged waiting period that precedes a negative event, stocks have a tendency to sell off significantly in advance, only to rally with strong returns once the feared thing actually happens.

Russia’s attack on Ukraine is still unfolding and is potentially the biggest geopolitical crisis in a generation, if not longer. Both regular and financial media are flooded with punditry on what will happen next and what it means for investor portfolios. Frankly, this strikes us as misplaced energy. We suggest that no one really knows where this crisis goes from here, because history has shown that once similar events have begun, they tend to evolve beyond the control of any one person, including the instigator in this case, Vladimir Putin. Investors should focus on controlling what they can—namely match the amount of risk they take in their portfolios with a risk level that is comfortable and meets their goals—and keeping market volatility in perspective.

The market drawdown in Spring of 2020 as Covid-19 came onto the scene was obviously a stressful time for investors, but aside from the brief bear market that occurred in 2020, this is the first correction for the S&P 500 since 2018. That is a long time for investors to go without experiencing significant market losses, and it is understandable that even experienced investors may be feeling more stressed now because of it. Historically speaking, corrections like the one we just saw are much more frequent. Going back to 1928, the S&P 500 experiences a correction every 1.1 years. Not only are periods like this a regular occurrence, but the investors should also recognize that the periods following market corrections tend to see strong rebounds. 8 out of the last 10 corrections in the S&P 500 saw positive returns in the twelve months that followed the correction, and 7 of those 8 periods saw double digit returns higher in the following year. Another historical comparison that can give investors some perspective is the market reaction to the Gulf War in 1990. The S&P 500 lost 16.22% from the day Saddam Hussein’s Iraqi forces invaded Kuwait through when the market bottomed about two and a half months later. In the twelve months following that market bottom, the S&P 500 gained 29.10%.

The cause of every market correction is unique, including this one. How the war in Ukraine impacts the Fed’s plans to tighten monetary policy is unknown, although hopefully investors will have more clarity about this following Fed Chair Jay Powell’s press conference on March 16. The consensus view has changed since the Ukraine invasion; whereas a 50-basis point rate hike in March was previously thought to be somewhat probable, the odds have significantly reduced. While each correction is different in many ways, a characteristic that runs through each one is investor pessimism. Investor sentiment, as measured by the American Association of Individual Investors is at its lowest level since April 2013. While this indicator is not that informative during normal times, at the extremes it is a reliable contra-indicator of what will happen in the market. In other words, some of the best times to be invested in the market have historically been when investors are feeling the most bearish.