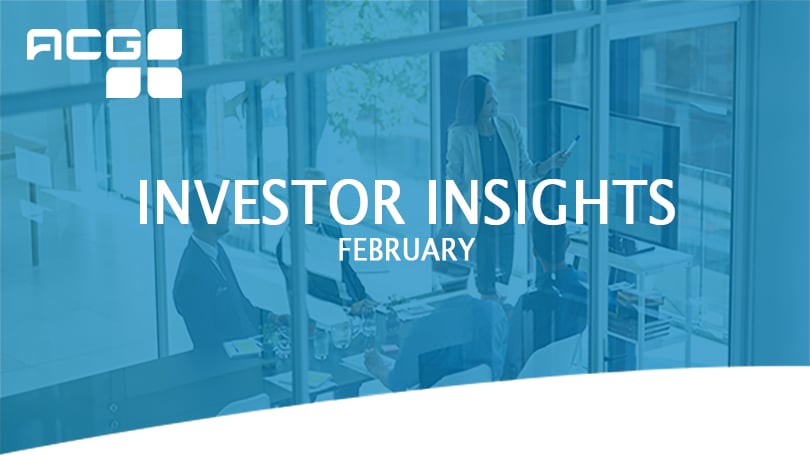 38.94 The Vix, a measurement of volatility in the S&P 500, reached as high as 38.94 in intraday trading during January, the highest it had been since October 2020 as investors expressed concern over the Fed tightening monetary policy.

7% The Consumer Price Index recorded a 7% year-over-year increase in prices in December, the largest increase since 1982. Markets stumbled out of the blocks into 2022, as investors endured levels of loss and volatility in January not seen since March of 2020. The S&P 500 lost 5.17% during the month and finished 5.78% off the all-time high reached on January 3rd. Growth stocks took the brunt of the pain: the NASDAQ lost 8.96% in January and nearly entered a bear market, falling 16.84% from its all-time high before finishing the month 11.24% off its peak. The primary cause for stock volatility—rising interest rates and concerns around the Federal Reserve’s pace of policy tightening—also led to a rough month for bonds. With the yield on the U.S. 10 Year Treasury rising from 1.51% to 1.78% in January, the Bloomberg Aggregate Index of bonds lost 2.15%. The rare bright spots in the market were those correlated with the rising price of oil. The cost of a barrel of WTI Crude rose from $76.99 to $88.32 over the course of January, driving the energy sector of the S&P 500 19.1% higher. Emerging markets, though negative overall, performed relatively well as many of the oil-exporting countries like the U.A.E, Mexico and Russia had strong market returns.

Although January had other important news events like Russia's potential invasion of Ukraine, the primary driver of volatility was the growing concern that the Federal Reserve's impending policy tightening would create an unfavorable environment for stocks. Following the Fed’s policy meeting in the last full week of January, Fed Chair Jay Powell confirmed that the central bank’s asset buying program would end in March. The conclusion of this piece of accommodative monetary policy would set the stage for the Fed to begin hiking its Federal Funds Rate from the current lower bound of zero, where it has been since it was reduced in early 2020 in response to the pandemic. Expectations for the pace and degree of rate hikes have continued to rise over the past month; the CME FedWatch Tool now has the probability of four rate hikes at 26.3% and five rate hikes at 32.8% (a point of clarity: the word “hike” has become synonymous with a 0.25% increase in the Federal Funds Rate, although it is possible the Fed might raise the rate by two “hikes”, or 0.50%, in one announcement). Jay Powell’s press conference on January 26th was viewed as hawkish, with the most notable quote, “I think there’s quite a bit of room to raise interest rates without threatening the labor market,” signaling that the Fed is prepared to do what’s needed to head off inflation. For context of the speed of the Fed’s expected action, when the Fed last began raising interest rates in December 2015 under the previous chair, Janet Yellen, it took two years to get to 1.25% (five hikes), more than twice as long.

It’s not that Jay Powell sadistically enjoys watching stocks go down. The Fed has a mandate to keep inflation at a reasonable level, and for the past several months it hasn’t been. Perspectives vary on how much of the recent inflation stems from supply chain issues, wage increases or the massive stimulus from the Fed and Congress in response to the pandemic. Frankly, the causes are becoming a moot point, as the longer inflation sticks around, the more it roots itself into the public psyche, begetting more inflation as consumers accelerate their purchases in fear that prices in a month will be much higher than today. The December reading of the Consumer Price Index (CPI) was a 7.0% year-over-year increase, the highest since 1982. The CPI reading has been above 2%, the Fed’s stated average target, since March of last year and has been above 5% since June. When the Fed last began hiking rates in December 2015, inflation was effectively nonexistent. Thus, the Fed feels they must move faster this time around. Unless the labor market, the Fed’s other mandate, begins to take a turn for the worse, the Fed has a clear path for quickly hiking rates. Since it appears almost anyone who wants a job can get one, the labor market likely won’t slow the Fed down.

How should investors respond? First, it is important for investors to recognize that a rising rate environment does not necessarily mean the stock market can’t do well, especially when interest rates are likely to remain low in absolute historical terms for the foreseeable future. The S&P 500 averaged an annualized return of 9.25% from 2016-2018 as the Fed brought the Federal Funds Rate from 0% to 2.25%. The historical rhythm of monetary policy tightening has been that stocks go through an initial period of volatility before settling down. Investors should balance this historical pattern of calming with a recognition that this tightening cycle will likely be more aggressive than others, and therefore the volatility may be more prolonged. That brings the second point investors should consider: although the stock market is not part of the Fed’s dual mandate, practically speaking, they do consider it. While the stock market and the economy don’t necessarily move in tandem, a significant and prolonged drop in stocks could, on its own, lead to recession, upsetting the labor market that the Fed is mandated to support. This could result in the Fed slowing its rate of tightening, even if inflation is still higher than desired. Third, most importantly, investors should not behave reactively to the current losses in the market. History—including January 2022—has shown that some of the best days in the market cluster around some of the worst days. Those who react to big declines in the market by selling stocks are getting all the bad while missing the good.

The monetary and fiscal stimulus of the past two years has not only been a supporting feature of the stock market, but in the case of many stocks it served as a tailwind. Investors benefitted from this period and many people may have grown used to a comparatively easy time in the history of the markets to make money. As we return to a more traditional era for the markets it is important for investors to keep things in perspective: stocks aren’t destined to go down simply because interest rates are rising; in fact, stocks are one of the best hedges against inflation in the long run. But investors should recognize that the returns over the next decade likely won’t be as strong as they were during the past 10 years of loose monetary policy.

Avoiding rash reactions in volatile periods like this is the primary thing that determines investor success, so it is worth finishing with a few points to help our readers put the current market in context. First, markets are anticipatory and tend to lead whatever news event is following returns. With investors so focused on the Fed’s rate of tightening, some investors might think a wise strategy is to sit things out until the Fed’s next meeting in March. History has shown that this approach tends to leave investors suffering most of the losses during the anticipatory stage and none of the gains when markets rebound from a greater sense of clarity. Second, investors should avoid the tendency to anchor their performance to the all-time highs of their portfolio. While it’s true that most investors have lost significant sums of money in the past month, they likely made significant sums in recent years during the strong market. Markets tend to overshoot in both positive and negative directions, and investors should appreciate this when evaluating their performance. Finally, the volatility experienced in January should be a reminder to all investors that there is value in diversifying one’s portfolio in accordance with risk tolerance. Diversification may seem unnecessary in strong bull markets, but times like those in January remind investors that stocks don’t always go up, so adding other types of uncorrelated assets is beneficial.