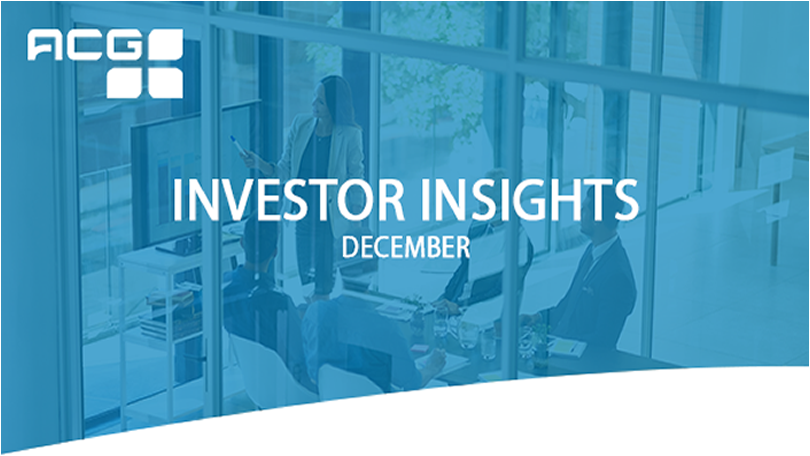 14.85 The MSCI Emerging Markets Index returned 14.85% during the month of November. This is the highest monthly return for the index since 2009.

-0.77 The spread between the 10-year and 2-year Treasury yield inverted by 0.77% during November which is the most inverted the yield curve has been since 1982. An inverted yield curve has historically been a reliable indicator of impending recessions. The Fourth Quarter Rally continued in November as both stocks and bonds posted strong monthly returns. The S&P 500 gained 5.6%, with the materials and industrials sectors leading the pack, but the real story in equities was on the international front. International developed markets gained 11.3% while emerging markets led the way at 14.9%. While the international markets had strong months in their local currencies alone, much of the international return was driven by the U.S. Dollar’s weakening from its recent highs. One Euro cost only $0.99 at the end of October but cost $1.04 by the end of November, a significant move in the currency world. Meanwhile, falling interest rates propelled bonds higher. The yield on the 10-year U.S. Treasury fell from 4.10% at the end of October to 3.68% by November 30. The 2-year yield fell from 4.51% to 4.38%. As a result of the falling rates, the Bloomberg US Aggregate gained 3.7%.

Not the first time this year, markets have been strong on the hope of a “soft landing” resolution to inflation—that the Fed can meaningfully bring down inflation without tipping the economy into a recession. This narrative got fresh wind in its sails in November through a handful of macroeconomic data releases. The October jobs report released on November 4 showed that 261,000 non-farm payrolls were added compared with an expected 200,000. While we have been in a cycle of “strong economic news equals market selloff”, stocks finished slightly higher the day of the jobs report. Stocks were then off to the races from November 10 onward after the October CPI release came in at 7.7% year over year compared with an expected 8%. October was the first month in 2022 in which CPI came in under consensus expectations, and this gave strength to the camp that believes we’re past peak inflation, allowing the Fed to soon pump the brakes on their monetary tightening. Fed Chair Jerome Powell further boosted these expectations in a November 30 press conference in which he said that a moderation in rate hikes is coming and gestured toward only hiking rates by 50 basis points in December, not 75 basis points like the previous four hikes. This is the bull case. Yes, the market for labor demand is dropping like a rock and layoffs in areas like the tech sector have been significant, but that doesn’t mean that unemployment in the aggregate necessarily needs to rise to recessionary levels. If inflation continues to cool (the next CPI release is on December 13) then this will give the Fed the evidence of a sustaining trend that their actions thus far have already done most of the work, allowing them to cease rate hikes.

This scenario is possible, but it is by no means guaranteed. Even if inflation does begin to materially subside, and even if the Fed’s last rate hike of this cycle is in December (a very big “if”), corporations may still see earnings decline, or at least grow by less than the market currently anticipates. We have been writing since summer that, while much of 2022’s market declines thus far are attributable to high inflation and rising interest rates causing valuations to compress (for example, the price tprice-to-earningson the S&P 500 falling from 21.4 in January to 17.6 in November), subsequent declines would likely be driven by earnings declines. While earnings forecasts had been surprisingly resilient over the past 4-5 months, we are beginning to see analyst forecasts for earnings growth in 2023 come down more rapidly. S&P 500 earnings in 2023 were forecasted to be $252 as of this past April but have since come down to a forecast of $230. This is still growth, albeit mild, but what remains to be seen is how much further these revisions come down.

In summary, investors shouldn’t take the current rally as a clear signal that the worst is behind us. An earnings recession would likely lead to a new low in stocks, wiping out the gains of October and November. Additionally, while inflation, the Fed and U.S. earnings have understandably been center stage this year, other flashpoints may continue to weigh on markets. Protests in China, in response to the government’s zero-covid policy lockdowns, have been growing in recent days and have injected fears about growth in China’s market and economy as a result. Separately, the massive destruction of wealth in the cryptocurrency markets this year was amplified in November following the collapse of crypto firm FTX; while this massive scandal appears confined to the crypto markets, we are still learning more and can’t rule out the possibility of broader financial contagion. The largest threats to financial markets typically manifest as surprises; investors should never assume the path ahead without risk and should structure their portfolios accordingly.