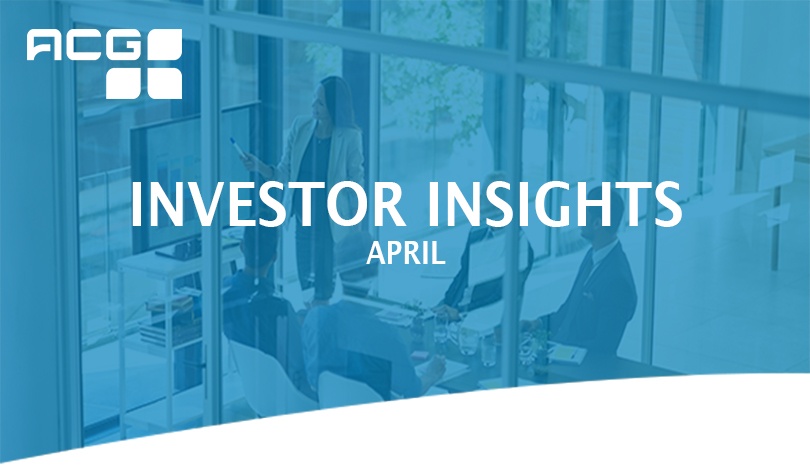 -5.93% The Bloomberg Aggregate Bond Index lost 5.93% during the first quarter, the third worst return it has had since 1980. Bonds suffered as interest rates rose due to inflation and expectations of tighter monetary policy.

39% The Energy sector of the S&P 500 gained 39% in the first quarter. It was by far the best performing sector as it benefitted from oil prices not seen since 2014.

2.25% The most likely level of the Federal Funds Rate by the end of 2022 will be 2.25%, as surveyed by the CME FedWatch Tool. Less than 12% of respondents predict it will be lower. The current level is 0.25% after the Fed increased it in March. March provided some relief to close out what was an otherwise frustrating quarter for investors. The S&P 500 finished the month with a 3.71% return, the result of a resounding rally that began after hitting a low for the year on March 14th. From that point forward the index gained 7.8%, led by the technology and consumer discretionary sectors, two of the more beaten-up sectors earlier in the year. The S&P 500 closed out the first quarter overall with a 4.60% loss—obviously not a good quarter but much better than the correction territory it saw earlier. The energy sector was far and away the best performer in the quarter, gaining 39%. Oil prices were already hitting highs not seen since 2014 as the global economic reopening continued, only to shoot higher once Russia invaded Ukraine. Mid and small cap stocks in the U.S. also registered positive months in March, although they rallied less and gave up their leadership on large cap for the year. Developed country stocks did well in March, while emerging markets continued their decline with a 2.2% loss in March, now down 6.9% for the year.

While stock investors caught a break in March, the pain continued for bondholders. The main bond index, the Bloomberg Aggregate, lost 2.78% in March and is now negative for the year by 5.93%. It is the third worst quarterly return for the index since 1980. The driver of bond losses has been the significant increase in market interest rates (which move inversely to bond prices). The yield on the 10-year U.S. Treasury started 2022 at about 1.5% before peaking in March near 2.5%, finishing the first quarter at 2.33%. Interest rates are driven by different factors depending on the maturity of the bond. Longer dated bonds like the aforementioned 10-year U.S. Treasury bill have seen rates rise because of the persistent inflation that has been nagging U.S. consumers for the better part of the year. Shorter dated bonds, like the 2-year U.S. Treasury bill, are more influenced by the Federal Reserve’s intention to hike their own interest rate to combat that inflation. The 2-year T-Bill has also risen significantly this year, starting at 0.73% and finishing the first quarter at 2.31%. In fact, at the time of this writing, the yield on the 2-year exceeded the yield on the 10-year, a worrying sign that we’ll touch on later in the newsletter.

The war in Ukraine has created uncertainty in the global economy and capital markets, to say nothing of the significant human tragedy, and this has injected volatility into the markets. While reports of recent peace talks have been encouraging, the war will continue to create a cloud of uncertainty that will weigh on markets. Having said that, stock and bond indexes would still be negative this year if Russia had never invaded Ukraine. The primary driver of volatility in the first quarter was inflation and what the Fed plans to do to reduce it. One of the Fed’s two mandates is to keep inflation under control, and with inflation running rampant for the better part of a year, the Fed is compelled to move away from the monetary stimulus of the pandemic era into a regime of tighter monetary policy. The Fed took this first step in March by halting the asset purchase program it began at the onset of Covid lockdowns as well as hiking the federal funds rate to 0.25%. Forecasts for the speed and degree of rate hikes have been volatile this year. From January to mid-February the consensus became increasingly hawkish, that the Fed would hike rates 7-8 times, possibly hiking 0.50% in March instead of a more modest 0.25%. With the onset of the war in Ukraine, Fed expectations moderated significantly as Fed watchers assumed that the impact of the war on the global economy would make the Fed more cautious. However, as the Fed announced the 0.25% hike in March and Chair Jay Powell gave his standard press conference, he signaled the Fed’s willingness to do what is necessary to get inflation under control. The tone was considerably hawkish and has led forecasts to ramp back up to the 7-8 hike territory. This subsequently led market interest rates to spike in March, leading to more pain for bond investors.

We caution readers against worrying too much about the Fed’s plans. While it’s true that current forecasts paint a hawkish picture, the Fed, as its committee members always communicate, is data dependent. They will adjust their plans accordingly as subsequent economic indicators are refreshed in the coming months—inflation indicators, yes, but other metrics that inform on the health of the economy. The Fed has no interest in blindly pushing the U.S. into a recession and causing unemployment, it’s other mandate, to rise. With the economy looking very strong right now, it is only logical for the Fed to tighten policy, but signs of weakening will be considered if they arise.

As a result of current expectations on the Fed, the shorter end of the yield curve has risen above the longer end of the curve. A commonly watched metric is the 2–10-year spread—the difference between the yields of a 10-year U.S. treasury and a 2-year—and it has triggered an ominous warning. As of this writing it has gone negative, meaning the 2-year yields more than the 10-year. We wrote about this extensively in our newsletters toward the end of 2019, when the same thing happened. This has been a reliable indicator of an impending recession. It will be interesting to see whether it holds true this time, too, but regardless we feel it’s appropriate to provide some context. While it has been historically reliable, it usually takes between 18 to 24 months for a recession to occur following the spread going negative. The indicator also has no bearing on the severity of a recession. If this historical timeline holds true, it means that the U.S. won’t see a recession until the end of 2023 or the beginning of 2024. If inflation is under control by that point, then the Fed will once again have tools available to moderate a recession; however, if inflation is still persistent at that time, it will be a difficult environment for the Fed to provide relief.

There are always lessons to take from difficult market environments, and the first quarter of 2022 was no exception. If you were nervous about your portfolio and felt tempted to make reactionary changes, you weren’t alone. We pointed out last month that investor sentiment was at a historically extreme low, so clearly there was enough pessimism to go around. However, we also pointed out that investor sentiment is historically a good contra-indication of how markets will behave going forward. Investors who threw in the towel during the first half of March would have missed the giant rally that occurred during the last two weeks of the month. We won’t claim to know where the market goes from here. The main threats—persistent inflation, Fed tightening, and the war in Ukraine—are still driving the narrative. As investors, we should focus on what we can control, namely, the risk we take in our portfolios.