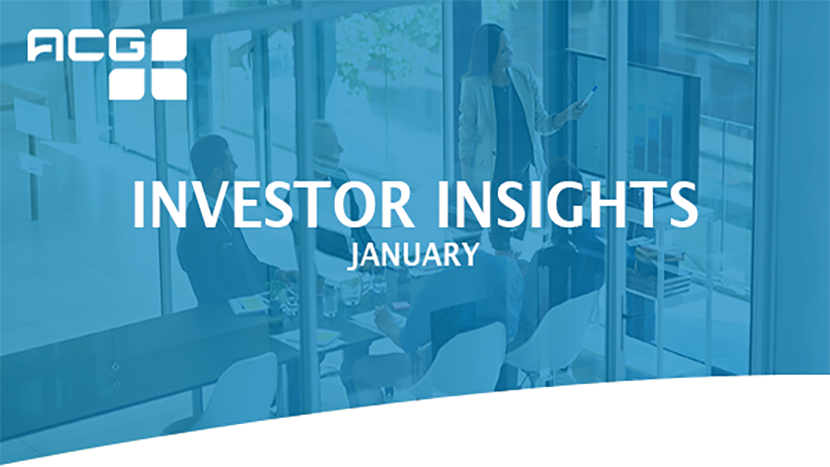 9.6 The FTSE NAREIT All Equity REIT index gained 9.6% in December, capping an excellent year for the real estate market in which the index gained 41.30%.

6.8 The Core Consumer Price Index (which excludes the prices of food and energy) increased by 6.8% in November on a year-over-year basis.

3 The Fed is expected to hike its benchmark rate three times in 2022, according to current estimates. The expected rate of policy tightening has accelerated in recent months as inflation has been more persistent than the central bank originally anticipated. December was a volatile, but ultimately profitable month for investors. The S&P 500 had its third-best month of the year with a 4.48% return, capping off a return for 2021 of 28.71% and a 52.39% return since the beginning of 2020, two years ago. Value outperformed growth in December as typically defensive sectors like Consumer Staples, Utilities and Health Care led (10.29%, 9.64%, and 8.98%, respectively). Nonetheless, large-cap growth outperformed all other major stock asset classes for all of 2021, with the S&P 500 Growth gaining 32.01%. 2021 is the sixth year since 2011 when the S&P 500 Growth has outperformed all other major stock categories, a testament primarily to the dominance of the U.S. technology sector that has changed our lives in the past decade and whose stocks also benefitted from a low-interest-rate environment. The only major index to finish in the red in 2021 is the MSCI Emerging Market Index, which lost 2.54% for the year, dragged lower by China which is both the heaviest weight in the index and the worst-performing emerging market country for the year. On the fixed-income side, bonds continued to struggle in December. The Bloomberg Barclays Aggregate Bond Index lost 0.26% for the month and 1.54% for 2021. The rising interest rate environment led to the first negative year for the flagship bond index since 2013 and the third-worst calendar year return since it was created in 1976. The yield on the U.S. 10 Year Treasury Bill began the year at 1.07% and finished at 1.51%.

December was a volatile month. Nine of the trading days during December saw a movement of greater than 1% in either direction in the S&P 500, and it was a sideways movement until the last ten days of the month when the index saw most of its gains. While there are a handful of distinct events weighing on the markets, the primary narrative in December was the impact of the Omicron variant of Covid-19 on the U.S. and global economic recovery. While indications have suggested that the variant is significantly milder on any individual, it is also significantly more transmissible, giving public health officials concern about the strain on the health system as a whole. As of the end of December, investors have been encouraged by the lack of economic restrictions being reintroduced; it appears that at least so far, the response will be changes to masking and distancing guidelines. Still, this new wave of Covid hasn’t arrived without some disruption as thousands of flights and public events in the U.S. had to be canceled around the holiday season. Officials have given reason for optimism, saying that although this wave will be difficult, it is likely that at the end of it that such a high proportion of the population will have immunity from either vaccines or getting the infection itself that 2022 could see Covid-19 finally take a back seat in our public awareness.

The Fed is the other major market narrative as we enter 2022. In the Fed’s most recent policy meeting it suggested that it would end asset purchases and hike interest rates three times in 2022. This would represent a fairly swift tightening of policy, although would still represent a more accommodative stance than right before the pandemic when the upper limit for the Federal Funds Rate was 1.75%. Of course, investors should not assume that this current trajectory will necessarily play out. The Fed is watching inflation closely, and if economic indicators of inflation continue to print year-over-year increases of more than 5% or 6%, the Fed may have to tighten even faster. According to the CME FedWatch Tool, the probability of a three-hike year in 2022 was less than 5% as recently as September, but the tool now suggests there is a 66.7% there will be at least three rate hikes in 2022. This shows how quickly expectations around the Fed can change.

Generally speaking, investors were bullish to begin 2021. With the economic recovery just getting underway, the vaccination effort, massive stimulus coming out of Washington combined with a hyper-accommodative Fed, there were plenty of reasons to expect a big year in the stock market. This not only turned out to be true, but it was probably a bigger year than most bulls anticipated. Entering 2022, fewer of those tailwinds are in place: the Fed will be tightening policy; the prospects for fiscal stimulus in 2022 are virtually null in an election year; the economic recovery should continue to be strong, but it will be growth off a higher base. Add to that the thorny issue of inflation, and investors should prepare for a tamer 2022. There are still reasons to be optimistic: we expect Covid will become less and less of an economic disruptor; the Fed, though tightening policy, will still be in an accommodative stance by historical standards; earnings growth is still expected to be strong in 2022 (FactSet’s latest estimate is a 9% YOY growth rate for companies in the S&P 500). Investors shouldn’t be sad that this stretch of massive returns in the stock market is potentially over, but rather they should be happy that it happened. Each investor’s specific investment strategy should reflect their goals, anyway, and not what’s happening in the market from year to year, and investors with stock exposure in recent years are likely ahead of schedule or have a higher degree of protection, in meeting their goals.