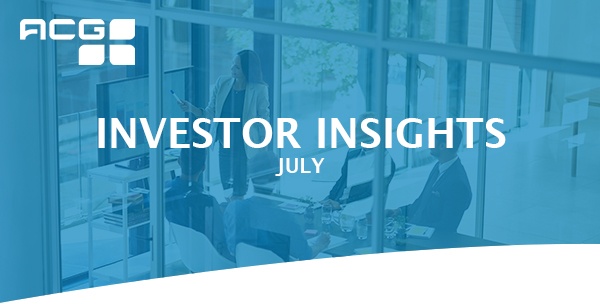 14.6%  The S&P Corelogic Case-Shiller home price index showed a year over year increase in home prices of 14.6% in April. This is the highest reading since the index began more than 30 years ago.

Market resiliency continued in June, with the S&P 500 finishing positive by 2.33%, capping off a strong second quarter at 8.55% and the first half of 2021 with a stunning 15.25% total return. Not all corners of the equity market performed well in June, however, with the S&P 500 Value losing -1.17% and the S&P MidCap 400 Value losing -2.81%. Growth outperformed value by a significant margin, although in general, value is still ahead of growth for the year so far as the traditional economy sectors of Energy, Financials and Real Estate have benefitted more from economic reopening. Interest rates fell during the month despite some less dovish signals from the Fed. The yield on the 10-year US Treasury opened the month at 1.63% and finished at 1.49%. This provided some needed relief for bonds—the Bloomberg Barclays Aggregate Bond Index gained 0.7% in June, although it is still negative for the year by -1.60%.

The most impactful headline of the month landed on June 16, when the Fed released a statement and Chair Jerome Powell held a press conference following their most recent policy meeting. In short, several more Fed officials are indicating that they expect the Fed will begin increasing the Federal Funds Rate from the zero-lower bound by late 2023. Previously, the median projection showed that the Fed expected the rate to stay at zero through 2023. This, combined with the Fed's continued mention of tapering its bond-buying program, is the latest in a series of comments from Powell and others that are decreasingly dovish—it would sound absurd to say increasingly hawkish. On the one hand, this is good news. The vaccination rollout has been effective in getting Covid-19 under control in the U.S., and the overall economic reopening effort is going as well, if not better, than many hoped for at the beginning of the year (notwithstanding the distortions in the labor market from unemployment subsidies and lifestyle changes brought about by the pandemic). The problem, however, is that inflation, which the Fed is mandated to manage around 2% per year, is surging at levels not seen in over a decade. The latest Consumer Price Index reading showed a year over year increase in prices of 5% during the month of May. This is the highest reading since the indicator rose by 5.4% in August 2008. While the Fed believes this increase in inflation is transitory in nature—due to temporary factors like pent-up demand, built up savings and supply chain disruptions—they can’t know that with certainty. If the economic rebound continues to be stronger than expected, then the Fed will need to get in front of the inflation problem sooner than they thought they might need to. Because markets hate knee-jerk shifts in actual monetary policy, the Fed’s policy on providing forward looking guidance is likely to be one of continuously softening the ground and bringing expectations nearer and near toward the day when the Fed actually begins to tighten again.

The Fed’s mid-month announcement made for some uncomfortable trading days. The S&P 500 lost a little bit over 2% in a week. However, investors quickly shrugged off this news and the bulls began to drive again. We can surmise that one prominent reason that stocks continue to rise is the increasingly rosy Q2 earnings season that analysts expect to see beginning in July. According to FactSet on June 25th, the estimated Q2 earnings growth rate for the S&P 500 is 62.8%. If that pans out, it would be the highest year-over-year growth rate since the fourth quarter of 2009, when it was 108.9%. Not only is this a big number in absolute terms, but it is also significantly higher than analysts expected it to be at the beginning of the quarter (52.1%). As we’ve written in recent months, the earnings picture for all of 2021 continues to get revised upward. In December 2020, analysts were calling for an already robust earnings growth rate of 22.1%. As of June 25, earnings in the S&P 500 are now expected to grow by 35.2% for all of 2021. This raises two important observations: first, stocks may be historically expensive, but they are looking less and less overvalued as forward-looking earnings—the denominator in the price to earnings ratio—keeps getting raised. Second, analysts have been significantly behind the curve all year, and we see no evidence to suggest that their upward revisions will stop any time soon. In short, even with the S&P 500 returning 36.46% since the beginning of 2020, there is still a strong bull case for stocks.

Most investors are apparently optimistic, too. The research arm of Natixis recently produced survey data showing that investors in the U.S. expect the average annual return of stocks to be 17.5% over the long term after accounting for inflation. This is approximately double the historical average depending on what time period you consider and is even higher than the average annual return we’ve seen over the past 10 years of one of the strongest bull markets in modern times (the trailing 10-year annual return of the S&P 500 is about 15%.) Investors clearly aren’t taking the whole “past performance is not an indicator of future returns” disclaimer seriously.

All joking aside, investors, particularly those in or near retirement, should be very careful not to project forward the same return they’ve seen over the last decade when planning for their goals. Unrealistic return expectations are bad for a couple of reasons. For one, they help investors rationalize a higher degree of spending which, if their expectations aren’t met, risks the sustainability of their retirement nest egg. Second, when high expectations lead to disappointment, this can cause investors to overextend themselves by taking on more risk than they previously would have. This, too, can threaten one’s goals.