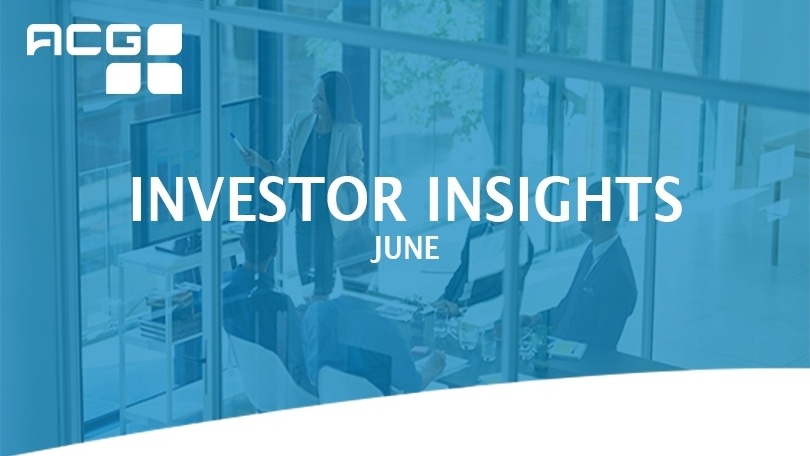 May was a challenging month for equity investors. All major indexes saw declines during the month. Small-cap and mid-cap stocks led the domestic decline falling 8.73% and 8.02%, respectively. The S&P 500 suffered its first monthly decline of the year, falling 6.35%. Only one sector of the S&P 500 was positive during the month, Real Estate (1.16%). The worst performing sectors were Energy, losing 11.14%, and Technology, which lost 8.69%. International equity returns were also negative. The MSCI EAFE, which consists of developed international companies, lost 4.80% while the MSCI Emerging Market Index suffered larger losses, falling 7.26%.

The move away from equities drove bond yields lower and prices higher. The 10-year Treasury Yield fell from 2.51% at the end of April to 2.14% at the end of May. The Barclays US Aggregate Bond Index rose by 1.78% for the month and is positive by 4.80% year-to-date. High yield bonds, which have more credit risk than investment-grade corporate bonds or government bonds, lost 1.19% during May; however, the index is still positive by 7.49% year-to-date.

The escalating trade war between the U.S. and China was the catalyst for the large equity declines. Sources had been reporting for some time that an official deal on trade was approaching, but suddenly the progress diminished, and President Trump announced he would increase tariffs from 10% to 25% on Chinese goods worth $200 billion. The President also threatened to add tariffs to almost all additional Chinese goods, which are currently untaxed. This equates to around $325 billion of Chinese goods. China retaliated by announcing it would increase tariffs on $60 billion worth of U.S. goods, effective June 1, 2019. The Chinese tariff rate is between 5% and 25%.  With more Chinese goods coming into the U.S., the U.S. has the advantage if tariffs are the only bargaining chip.

In addition to the tariffs, President Trump raised the stakes by banning Huawei, a major China technology company, from doing business in the U.S. The President said national defense was the driver for the ban. The U.S. Justice Department charged Huawei earlier this year with stealing trade secrets and trying to evade U.S. sanctions on Iran. Many U.S. security officials have believed for years that Huawei was a vehicle for Chinese espionage.

China does not appear to be crumbling to President Trump’s pressure, and they have options of retaliation. The Chinese have been reducing their holdings in U.S. Treasury securities, but it would probably be counterproductive to sell a mass amount of their Treasury holdings. Beijing has readied a plan to restrict the sale of rare earth metals to U.S. technology companies. China currently supplies around 80% of the rare earth metals to the U.S. technology sector. These metals are crucial to U.S. technology companies, and any restrictions to the supply of these metals would be a bombshell for many U.S. companies. China has also restricted future purchases of soybeans from American farmers. This is quite hurtful to farmers, but President Trump has tried to combat this retaliation by providing a $16 billion aid bill for farmers, this is in addition to the $12 billion aid bill last year.

The current state of relations between the U.S. and China are not good, but President Trump still says a deal will get done. Will the deal come too late and is the next election playing a role in the current situation? Some believe a trade war with China will rally Trump’s base, but it could also be the catalyst for the next recession and winning an election during or immediately after an economic recession is a difficult task. President Carter was the last President to try to win re-election in the same year as a recession, and he lost 44 of 50 states to Reagan. How far is Trump willing to push this?

Near the end of the month, after weeks of combatting with China over trade, President Trump decided to pick another trade fight. He announced via Twitter that effective June 10 the U.S. would impose a 5% tariff on all goods coming into the U.S. from Mexico until illegal migrants stop coming through the Mexican border. Instead of teaming up with other countries to contest China’s trade practices, the President continues to choose to go at it alone while picking fights with other countries.

As markets began to sell-off in May, Treasury yields began to fall, especially longer-dated bonds, which are not as anchored to the Fed Funds rate. The dramatic drop in longer-dated bonds caused the yield curve to invert, which means longer maturity bonds have a lower yield than shorter maturity bonds. As previously written about, an inverted yield curve is a sign that something is not right with the economy and has often times been a precursor to a recession. The yield curve inverted earlier this year but only for a short period. Whether or not this is a sign an upcoming recession, only time will tell, but the longer it stays inverted, the more concerning it may become.

The Federal Reserve held one of their scheduled periodic meetings earlier this month. The minutes from the meeting indicated that members had strong confidence in the economy, and some members said they were making upward adjustments to their GDP estimates for the full year. The minutes also stated there would be no moves “for some time.” However, the meeting occurred before the trade war escalation. By the end of May, the market now believes the Fed will cut rates twice in the next eight months. There is an over 63% chance of a September cut and a 62% chance of a January 2020 cut.

United Kingdom’s Prime Minister Theresa May announced she would step down as prime minister on June 7. She began her stint almost three years ago following the U.K. people’s referendum to leave the European Union. She encountered opposition on many occasions from the British Parliament when trying to devise a plan for the U.K.’s departure. Following her resignation, it will take the U.K. a few weeks to elect a new leader, during that time Prime Minister May has offered to act as caretaker. The current frontrunner to replace May is former foreign secretary and leader of the Brexit campaign in 2016, Boris Johnson. Even though Boris is the frontrunner, the race is wide open at this point.

Despite a challenging month, markets are still having a good year. The U.S./China trade dilemma will continue to dominate the headlines until a trade deal gets resolved or at least a de-escalation of recent actions. We are also heading into summer, which usually means less trading volume and additional volatility. If this sell-off continues, we may soon be reaching an oversold level, and a bounce may ensue. We do not recommend making any changes to your investment portfolio unless something has changed with your personal situation.