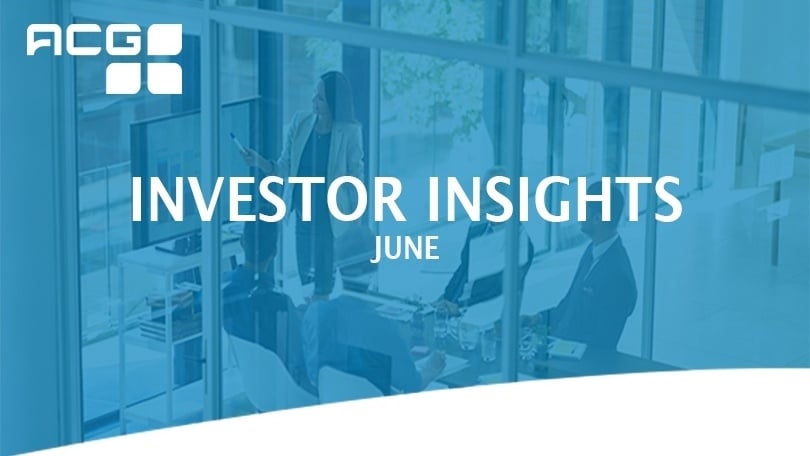 The S&P 500 has gained 18.19% during the first two months of the second quarter. The strong rally has erased most of the index’s losses from February and March.

The price of oil, as measured by the West Texas Intermediate Index, gained more than 70% in May, its best month ever. An uptick in demand, as well as record supply cuts, have pushed prices higher.

The U.S. economy contracted by 5% during the first quarter, according to the recent GDP release. This was worse than the expected -4.8% decline. On the bright side, many economists are now calling for less of a Q2 decline than originally feared.

An additional 2.1 million Americans filed for unemployment in the last week of May, bringing the total over 10 weeks to more than 40 million. In other news, the stock market provided another month of bumper returns—the S&P 500 was positive by 4.76% and is now just slightly below where we started 2020. The mid- and small-cap indexes finally outperformed the large-cap index in May, each positive by just shy of 10%, though both are still negative in 2020 by double digits. The chasm between growth and value stocks widened further during the month—the S&P 500 growth index is positive by 3.67% in 2020 while the S&P 500 value index is negative by -14.71%.

It can be tough for the average investor to get their bearing in a market like this. Why is the main stock index in the U.S. basically flat for the year with every economic indicator painting such a dire picture? Why is there so much of a disparity between large U.S. stocks and everything else? Even more so, why is there such a gap between growth and value style stocks?

Take the matter of the stock market versus the economy. Beginning with the stock market crash that kicked off the Great Depression in 1929, there had been 12 bear markets in the U.S. until 2020. The average market decline of those bear markets was -42%, and the average duration until a new bull market began was 22 months. In March we registered the 13th such bear market. However, while many regard this economic slump as the worst we’ve seen since the Great Depression, this bear market appears to have lasted only one month and will have declined less than the average, having fallen 34% from peak to trough.

The first thing to realize is that economic data is backward-looking and the stock market is forward looking. The conventional wisdom is that the stock market is a discounting mechanism for how the economy will look six months in the future. Evidently most market participants believe this crisis and the worst of its impact will be behind us by the end of 2020. Of course, there are plenty of pundits and officials forewarning of a second and third wave of Coronavirus, as well as legitimate concern that this pandemic will fundamentally alter the how people will spend their money in a way that will dampen the economy long term. Those risks are real, but there’s another reason the market is rallying in spite of them. That reason is that so much of how the market responds to news isn’t about whether it’s good or bad in absolute terms, but whether it’s relatively better or worse than prior expectations. Thus, when the economy reopens sooner than expected, when medical research advances sooner than previously thought, and when the impact on corporate earnings and the guidance from those executives outperforms forecasts from mid-March, suddenly there is plenty of positive-trending news on which the market can rally. Lastly—and this is what really sets this market apart from past crises—the speed and scope of stimulus, mainly from the Fed but also from congress, has been without precedent. The market has clearly taken the view since late March that the Fed in particular will do whatever it takes to prop up the economy. Whatever the long-term impacts of these programs might be, they are keeping the economy on life support and the market is rewarding that.

As mentioned above, however, the market rally has not treated all stocks equally. In this market there is the tech sector and then there is everything else. And it just so happens that the tech companies that truly matter reside primarily within the large market cap growth style category of stocks in the U.S. The tech sector makes up just over 30% of the S&P 500 (as noted last month, the big five tech companies now make up two thirds of that.) The next largest sector is health care, and it is half the weight of tech at about 15%. Now consider year-to-date returns for various sectors: the tech sector is positive for the year by 7.3%, consumer discretionary is positive by 5%, while most every other sector is negative. Financials and energy, which predominate the value side of the spectrum, are negative by 23.4% and 34.5%, respectively.

In mid- and small-cap investments, both the relatively smaller weighting of tech and the relatively worse performance of smaller tech companies has led to the underperformance of those asset classes. At just under 18%, tech is the largest weight in the mid-cap space, although industrials, financials and health care are all right behind it in terms of size. The tech sector in the mid cap index is down by -6.3% year to date, while industrial and financial mid-sized companies are down by -15.4% and -24.7%. The difference becomes starker in small-cap, where tech is only the fourth largest sector (a weight of about 15%) and in any case is down by -12.7% for the year. Both industrials and financials make up a bigger share of the small-cap index and are negative for the year by -21.2% and -31.9%, respectively.

This raises important questions for investors going forward, not only through the rest of this crisis but beyond as well. There had already been a “tech and everything else” narrative in the few years that preceded the pandemic. If, as many suspect, this crisis has accelerated trends in lifestyle and the economy that will favor big tech like Amazon and leave the rest of the economy in the dust, what basis is there to continue investing in other geographies, styles and market caps? Similar questions were being asked in 2000 as the Dot Com bubble grew bigger and bigger. This isn’t to suggest a similar bubble exists today, as today’s big tech has much more established business models and valuations that are at least somewhat tethered to reality. But to invest only in big tech would concentrate an investor’s assets in a handful of companies that could easily be disrupted by regulation, competing innovation or something else. Diversification, though it has made for a bumpy ride so far in 2020, remains the prudent way for most investors to achieve their long-term goals.