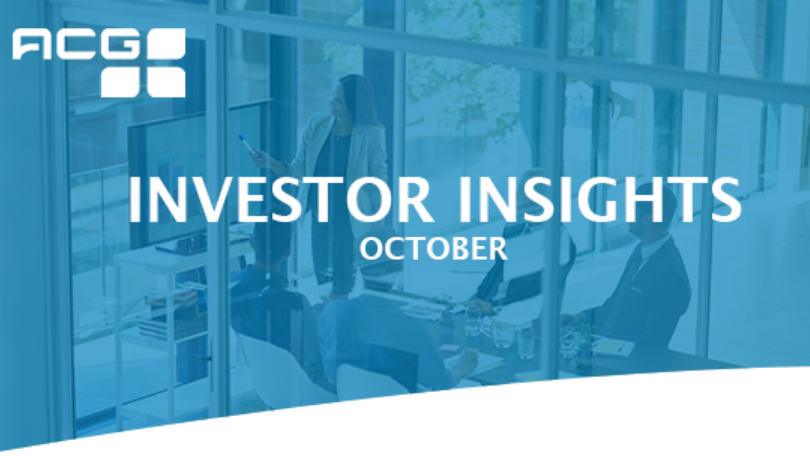 19.7 The S&P CoreLogic Case-Shiller National Home Price Index rose 19.7% for the year ending in July. This reading was the highest annual rate of price growth since the index began in 1987.

The S&P 500 suffered its first negative month since January, falling 4.65% but remains positive by 15.92% year-to-date. In past Investor Insights we pointed out that the market was being led by a small concentration of stocks, mainly mega-cap growth companies while other areas of the markets were failing to push higher. The rally in the largest names in the S&P 500 took a breather in September, which resulted in large cap value outperforming large cap growth, and mid-and small-cap outperforming large-cap. Among the top-five positions in the S&P 500, Amazon lost 5.35% for the quarter, Alphabet (Google) lost 7.62%, Facebook lost 10.54%,  Apple lost 6.80%, and Microsoft lost 6.61%. These five companies make up about 22% of the index. So, while the S&P 500 lost 4.65%, the S&P SmallCap 600 lost 2.43% and the S&P MidCap 400 lost 3.97%. Despite the challenging quarter, the S&P is only 5% off all-time highs.

There were several factors contributing to the declines in mega-cap growth names, but one of the main drivers was the spike in interest rates. Because many growth companies are priced based on future growth and future cash flows, when rates move higher, current cash flows become more attractive than future cash flows. For the month of September, the 10-year Treasury interest rate started the month yielding 1.31% but finished the month yielding 1.49%, with most of the increase coming in the last five trading days of the month. The move in rates also made it a difficult month for bonds. The Bloomberg US Agg Bond fell 0.87% in the month and is now negative by 1.55% year-to-date.

The press release from the Federal Reserve policy meeting stated that sectors most adversely affected by the pandemic improved in recent months, but the rise in COVID-19 cases has slowed their recovery. The Fed commented that inflation was elevated, largely reflecting transitory factors. The release detailed that if progress continues as broadly as expected (regarding the economy), the Committee judges that a moderation in the pace of asset purchases may soon be warranted. The Fed is currently purchasing $120 billion of bonds per month. The Fed also dialed down GDP forecasts and increased inflation expectations. Of the 18 members, 9 expect a rate hike in 2022, up from 7 in the June meeting, and 13 members are projecting 2 rate hikes in 2023. The Fed is setting the stage to begin to tighten monetary policy, first with tapering monthly purchases and then raising rates later next year or in 2023. Even though the Fed is tightening, the Fed’s policy will remain loose by historical standards for some time. If the Fed is raising rates because the economy is strong enough to handle higher rates and not because inflation is forcing its hand, the markets can perform favorably at the beginning of a tightening cycle.

The Fed’s ultra-accommodative policies may be impacting the housing market. The S&P CoreLogic Case-Shiller National Index rose 19.7% for the year ending in July, its highest annual price increase since the index began in 1987. The concern around possible declines in future home prices is growing due to the unsustainability of recent price increases, combined with the potential of higher borrowing costs. However, there continues to be strong demand from buyers, coupled with low inventory, and input costs for builders are increasing both factors supporting higher prices. There will come a point when buyers simply cannot afford these higher priced homes. Recent data suggests that the percentage of housing costs compared to monthly income is at a higher percentage today than the average over the last decade. First time home buyers made up only 29% of all sales in August, its lowest level since January 2019, the normal percentage of first-time home buyers is 40%.

China continues to bring negative headlines and concerns to the market. The latest was in late September, China reinforced its stance that all cryptocurrency activity was illegal which pushed many cryptocurrency asset prices lower. Bitcoin’s peak to trough drop during September was greater than 20% and Ethereum’s was greater than 28%. Not completely government related but in the middle of September one of China’s largest property developers, Evergrande, announced that they may default on its debt. The company has $300 billion in liabilities. There does not seem to be an appetite for a bailout from the Chinese authorities as the authorities have told local officials to prepare for the company’s demise. Investors are concerned of the ripple effects of such a large company going bankrupt. As of the end of the month, the company had met one debt deadline, but missed another.

There are concerns heading into the fourth quarter around the impact that supply chains could have on the holiday shopping season that will begin in the coming weeks. Many parents are concerned about the lack of inventory on popular items and are starting Christmas shopping early. There are natural gas (LNG) shortages in China and in the UK that have pushed LNG prices higher. This shortage may extend to other parts of the globe. Companies like Costco are restricting the amount of some household supplies like toilet paper and cleaning supplies because of the lack of supply. Labor shortages remain across the country and are expected to continue until some of the impacts of previous stimulus run out.

September brought some concerning headlines and negative investment returns. This does not feel normal because this year has been almost an uninterrupted grind higher, but in fact, it is normal and even good to see some volatility and downward price movement. The volatility could continue and if higher rates persist the market leadership could continue to shift from a market led by a few mega-cap companies to a more broad-based rally like cyclical sectors: financials, energy and industrials.  We continue to emphasize the importance of having a diversified portfolio that is constructed based on your financial situation and objectives.